Normally I just include my Best Reads list with the rest of my reading statistics, but I thought I'd do something a bit different this year. Since I read right down to the wire, I don't post these statistics until after the New Year. (There's been at least one year when one of my Best Reads was finished on December 31.) Of course, I run the risk that y'all have already overdosed on Best Of lists, but... maybe you have room for one more? We shall see! (And if you are waiting for the rest of my reading statistics, those will be posted Wednesday, January 9. I'm taking my time this go-round!)

First of all, let's take a look at all the covers of the twenty books I gave my highest rating to in 2018. Strange how that number remains steady at twenty year after year because it's not a goal that I intentionally set.

How does the list break down by genre/subgenre? (By the way, you can click on the linked title for my review of the book if you're interested.)

Crime on the Fens by Joy Ellis
White Corridor by Christopher Fowler
The Birdwatcher by William Shaw
Field of Bones by J.A. Jance
Blood on the Tracks by Barbara Nickless
The Darkness by Ragnar Jónasson

Hitting the Books by Jenn McKinlay

A few months ago on Facebook, another Cathy-with-a-C asked me if I ever chose one book as my favorite book of the year. My answer was no. Normally, all the books are so good that I don't feel like splitting hairs and declaring one the "winner." They are all winners in my book. However... 2018 had two clear standouts, so I thought I would pay them a bit of special attention even if it does make me feel a bit guilty.

Which two books are my standouts of 2018? 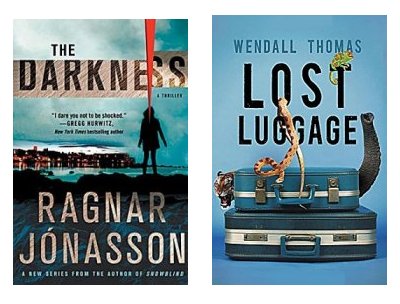 The first book in Jónasson's Hulda Hermannsdóttir series blew me away. The main character grabbed me by the throat and wouldn't let me go, and... Jónasson does something with the whole series format rulebook that threw me for a loop. I cannot begin to tell you how much I'm looking forward to the next book in the series, The Island!

And you have to know that the overwhelming sense of anticipation holds true for Wendall Thomas' Drowned Under, the next book in her Cyd Redondo series. Not only did I learn a lot by reading Lost Luggage, but it's also been years since I've laughed so hard while reading a book. Humor and knowledge are two of the greatest gifts this world has to give, and I love Thomas for packaging them up with a huge bow for me.

Have you read any of the books on my Best Reads of 2018 list? Which ones? Which books from your own personal lists do you think I would enjoy? Inquiring minds would love to know... and they're always on the lookout for more reading material!