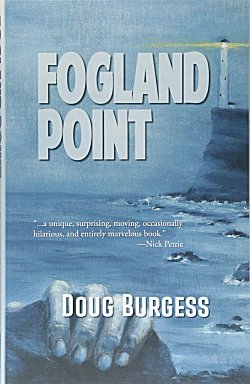 First Line: Little Compton sits on a tiny spit of land on the wrong side of Narragansett Bay.

David Hazard's escape from his family and the backwater town of Little Compton was short-lived. Fired from his job, he surrenders to the inevitable and returns home to care for his grandmother who is in the ever-tightening grip of dementia. When Grandma Maggie's friend Emma is murdered next-door, Chief of Police Billy Dyer knows that Maggie's a witness and her recollections could be invaluable to his investigation-- but how much can they be trusted?

The investigation stalls, newcomer millionaire Marcus Rhinegold's yacht disappears, and bodies begin washing ashore. Past and present are merging and an inevitable chain of events has been put into motion. The secrets of Fogland Point are about to be brought to light.

I picked up this book on a whim, and once I started reading, I was hooked. The evocative setting with its deep family roots screams New England, and every renegade character was better than the last. We hear everything through David Hazard's voice, and in a story that's laced with the destruction caused by his grandmother Maggie's dementia, there are flashes of humor that can provoke startled laughter from readers.

There are the Laughing Sarahs-- Maggie, Emma, Constance, and Irene-- women in their eighties who have been friends their whole lives. There is nothing they wouldn't do for each other. There's Chief of Police Billy Dyer, who may or may not be the stereotypical lump of a small town cop. Then there are other characters like the Bangladeshi couple from Queens who bought a store in Little Compton and proceeded to stock it according to their personal idea of what a New England country general store should be. (The townspeople aren't thrilled that they now have to drive for miles to get spaghetti sauce.) Street by street, house by house, character by character, I was drawn into Fogland Point.

And then there's the writing. With lines like "Aunt Irene is coming down the stairs, her big toe seeking out one tread at a time like a snail's antennae," it was so easy to picture each scene as it played out. Having watched snails and having seen old people going down stairs like that, I feel a bit dim for not putting the two together myself. There are several lines and scenes like that, and each one is a joyful discovery.

But how's the mystery you ask? It's a beaut. San Francisco's Lombard Street is as straight as a ruler compared to the plot of Fogland Point-- and I wasn't confused, I was delighted. As things were revealed, time and again I thought to myself that I should have seen it coming because the clues were all there. There's the mystery of Emma's death; and why did millionaire Marcus Rhinegold show up all of a sudden? There are ties to the Mafia and stories of shipwrecks and sunken treasure chests of gold. Just when you think you have one thing solved, you find out that you don't.

Or is it all a dream? "Because this is Little Compton, and nothing ever happens here." Or so the townspeople would have you believe...