A Coin for the Hangman by Ralph Spurrier 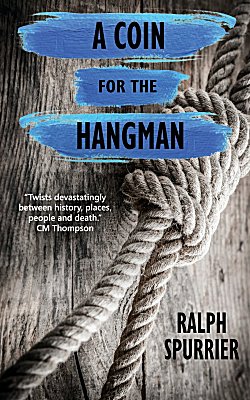 First Lines: It was the photograph that did it for them. All three of them.

Estate sales can turn up some fascinating treasures. When a bookseller takes his latest purchases back to his shop, he discovers the tools of one of England's last hangmen along with the diary of a condemned man he executed. As he reads the diary, he realizes that he has a mystery to solve because the wrong man may have died at the noose.

If I had to tell you what there was about A Coin for the Hangman that made me buy it, I couldn't. I just don't remember. What I do know is that I'm extremely happy that I took advantage of the sale. What a marvelous read!

Ralph Spurrier tells his story from multiple points of view, and this device works perfectly. One is the voice of the bookseller in 2006 who wonders just what he's got his hands on. Another is the voice of George Tanner, a British soldier who stayed after war's end to guard Nazi prisoners while they were put on trial. The third voice we pick up in 1953-- Reginald Manley, one of the last hangmen in England. His is a voice of such supreme self-confidence that it borders on hubris. Finally, the fourth voice is that of the condemned man, Henry Eastman, and we learn about him from his youth at the beginning of World War II to his death in 1953. Each voice has an important part of the story to tell, but it was lonely, misunderstood Henry that I came to care for most.

I was enjoying the story so much that I wished it would slow down... or that my reading speed would. Each voice is so distinct, and each one drew me right into not only the story, but into the time period itself. Manley and Tanner both helped liberate a Nazi concentration camp-- a section that was almost visceral in its impact, but I think some of the best scenes in the book involved the effects of the war on families. How those blackout curtains meant that family life shrank into just one room (the kitchen), and-- even more importantly-- how difficult it could be for both men and women to pick up their disrupted relationships after the war.

I didn't do very well when it came to solving the mystery in A Coin for the Hangman. If only I'd given one critical scene more thought instead of merely finding it puzzling as I raced on to the conclusion! This is a story where the vagaries of fate, coincidence, and even a misplaced word can all have consequences. At book's end, I was left with a profound sense of loss-- and the knowledge that I'd just read a remarkable book. I'm definitely going to keep an eye peeled for more books by Ralph Spurrier.