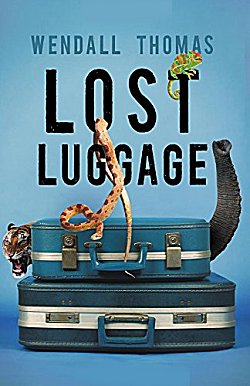 First Paragraph: Travel is my business. Or at least it was. After the last two weeks, no one may trust me with a drink order, much less their seat assignments, cabin preferences, or credit card numbers.

Third-generation Brooklyn native Cyd Redondo may be a travel agent who specializes in senior citizens, but she's never ventured farther than New Jersey. (The elders in her family suffer acute separation anxiety.) Shortly after the pet store owner next door to Redondo Travel is poisoned, Cyd wins a free safari. Going against her Uncle Ray's wishes, Cyd doesn't cash in the tickets for computers, she packs her bags and heads for Africa. Going along as her "plus one" is her convention fling, Roger Claymore.

The two arrive at their destination to find that their luggage has been lost and two of Cyd's elderly clients are in jail. Cyd barters them out only to discover that smugglers have hidden a half million dollars' worth of endangered parrots, snakes, frogs, and a Madagascan chameleon in their outbound luggage. Thus Cyd Redondo is rudely and abruptly welcomed into the world of international animal smuggling, and only her smarts, her stilettos, and her Balenciaga bag are going to get her out in one piece.

Thank heavens! I've been waiting for years to find a successor to Janet Evanovich, and I've finally found one. For the first eight books, I was a passionate Stephanie Plum fan. I would read during my breaks, and I would laugh so much and so hard that everyone in the breakroom made me start reading aloud. I can only hope that Wendall Thomas's hilarious Cyd Redondo series will take flight (and not fall victim to stagnant characters and plot lines like the older series did).

Before I go any further, I do want to warn animal lovers that this is not just a laugh-out-loud funny book; it's about the very serious topic of animal smuggling, and there are two short scenes which describe how the animals are readied for transport. These scenes made me yearn for instant karma: may every smuggler be readied for transport in the exact same way and be loaded on around-the-world flights only to end up as unclaimed baggage.

I love Cyd Redondo. Growing up with a herd of "brousins" (a cross between brothers and cousins), she still gets called "Cyd the Squid," but those brousins keep their distance. Cyd is into kickboxing-- in her stilettos-- and when she explained why she trains in that footwear, it made perfect sense. She's got a Balenciaga bag containing so many goodies that she could outfit a platoon, and that bagful of stuff isn't mere feminine vanity. This woman is a worthy successor to MacGyver. Lord, have mercy! And believe it or not, she is one amazing travel agent. Too bad she's fictional: depending on the age requirements, I'd love to have her handle all my travel plans.

Lost Luggage has so many things that made me laugh out loud, and it's the sort of book that I'd love to share all those things with you, but I will exercise restraint and let you discover them for yourselves. (I will admit that Barry the chameleon was my second favorite character, though.) Besides the amazing female lead and the marvelous humor, there's actually a good mystery to solve, too. If you've been pining for a mystery that makes you laugh, Lost Luggage is the one for you. As for me, it's going to be a long wait for the next book in the series!