The Player by Brad Parks 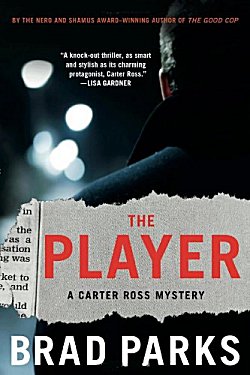 When investigative reporter Carter Ross hears that the residents of a Newark neighborhood are getting sick-- and even dying-- from a mysterious disease, he jumps right into the story, so much so that he gets sick himself.

Tracking down the source of the disease leads him to a construction site, and just when Ross thinks he's getting somewhere, the project's developer is murdered and his mob ties come to light. Ross realizes that his story just became even more dangerous than just an environmental hazard.

But back in the newsroom, he's courting disaster even more deadly than tangling with the mob. He's dating a co-worker while doing a bit of on-the-job training with a new intern-- and his boss (and former girlfriend) has some news that's really going to be electrifying. I won't even mention that his mother is on the warpath over his sister's wedding. Poor Carter Ross may be looking for some shelter before this is all over!

With author Brad Parks now making his name writing domestic thrillers, I've been forcing myself to read his Carter Ross mysteries as slowly as possible because I love them so much. Now that I've read The Player, I've only got one left, and once that's gone, I may go into mourning. This fifth book in the Carter Ross series is fun reading, full of the twists, turns, heart, and humor that I've come to expect from this talented writer.

At the heart of this book is a very real concern: "questioning the wisdom of allowing government to outsource its responsibility to protect the health of its citizens." We live in a world where not only people avoid responsibility for their actions but government, too. And this is all wrapped up in a bit of the history of Newark and its environs and a fast-paced, tightly woven mystery that has a lovely twist at the end. I love being completely bamboozled, especially by Brad Parks.

Since the heart of the mystery is so deadly serious, Parks expertly lightens the mood with his fantastic sense of humor. Neesha (AKA "Pigeon"), the new intern Carter is training, has a tendency to be the comic relief because she's still trying to follow all the rules she learned about journalism in college. Carter tries to tell her that "human beings are too messy for spreadsheets," but it takes Neesha a while to learn the wisdom of that statement.

The one thing that makes this series so entertaining is the fact that Carter Ross is just a normal, red-blooded American smart aleck, a guy who doesn't "know Chanel from chenille." He gets himself into some incredible scrapes, he truly cares about the people he writes about, and when rescuing a litter of kittens from a burning building, all he'd say would be "Aw, shucks." Carter Ross is my kind of guy, and Brad Parks' series is some of my favorite reading. If you haven't, give him a try. The first book in the series is Faces of the Gone.