The Women of Baker Street by Michelle Birkby 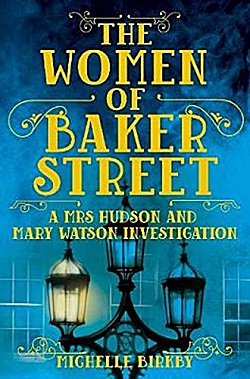 First Line: I am lying so still.

Just as Sherlock Holmes and Dr. Watson return from their famous Hound of the Baskervilles case, Mrs. Hudson falls ill and finds herself in bed in a private hospital ward. As the days pass, she learns that all of the other women in the room seem to have more than their fair share of secrets... and it may be her imagination, but a higher number of deaths seem to occur in this ward, too. In fact, on her very first night, Mrs. Hudson could swear that she witnessed a murder. Or was it the effects of the pain medication?

Meanwhile, Mary Watson has heard about young boys disappearing all across London, and she's determined to find them, save them, and reunite them all with their families. What the two women don't expect is that their separate investigations are going to collide in some very surprising ways.

My love affair with this series continues, and now I'm impatiently waiting for book number three. The House at Baker Street and now The Women of Baker Street are for all of us who just knew that there was more to Mrs. Hudson than met Sir Arthur Conan-Doyle's eye. Michelle Birkby's imagination is a delight. Holmes and Watson are supportive but stay out of the women's way. Mrs. Hudson is extremely observant and filled with common sense while Mary Watson is intuitive and impulsive. We get to know more about the Baker Street Irregulars, and who knew that it would be so hard to find good help, what with all the crooks trying to plant spies in Sherlock Holmes' residence?

Birkby is very adept at pacing, as well as ratcheting up the tension and suspense (and the occasional creep factor, too). Her misdirection is excellent; she had me fooled even though I'd deduced the importance of a specific location within a certain room. Yes, the mystery-- and how it is told-- is excellent, but it's what Birkby does with Mrs. Hudson and Mary Watson that really wins me over. Holmes trusts his landlady so much that she's the only one in whom he confides his secrets about Jack the Ripper, and Dr. Watson tells her, "Make sure you solve it... It's good for him to have rivals." There are even flashes of humor that make me laugh out loud-- especially the bit about Mrs. Hudson contemplating the demise of a pair of knitting needles.

Even though I can't begin to conceive of crime fiction without Sherlock Holmes, I've never particularly liked him. However, there are so many wonderful series now that add to the Holmes canon by taking a closer look at characters Conan-Doyle kept in the shadows, and Michelle Birkby's is one of the best. I look forward to many more investigations conducted by these two indomitable women. Hats off to Mrs. Hudson and Mary Watson!