The Darkness by Ragnar Jónasson 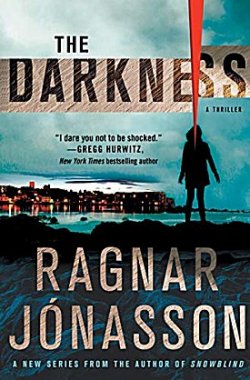 First Line: "How did you find me?" the woman asked.

Over her long career, Hulda Hermannsdóttir has hit the glass ceiling so many times that she should be severely concussed, but she keeps on going. Bringing justice to victims and solving cases are what this detective inspector lives for. But a few months before her sixty-fifth birthday, she is told in the cruelest way possible that she's surplus to requirements and being retired early. Her young male replacement is already here, and her desk needs to be cleaned out so he can start work.

One of the reasons why Hulda has been so successful is that she is supremely obstinate, and-- somehow-- she manages to avoid being tossed out by insisting on solving a cold case before she goes.

Over a year ago, a young Russian woman was found dead on the beach. After a very desultory investigation, her death was deemed a suicide and the case was closed. After all, she was just an asylum seeker. This has never set well with Hulda, so she quietly begins to investigate. It doesn't take her long to discover that no one she interviews is telling her the complete truth-- and that another young Russian woman vanished at the same time. But her superior is anxious to get rid of her, the clock is ticking... is Hulda going to be able to solve this one last case?

Ragnar Jónasson has rapidly turned into my favorite Nordic crime fiction writer. Iceland comes to life under his pen. Give this man snow and the endless dark days of winter, and he's fully capable of giving readers a severe case of claustrophobia to go along with his well-paced and -plotted mysteries. This newest trilogy opens with a bang. The Darkness is a superb character study of Detective Inspector Hulda Hermannsdóttir.

The Darkness takes place at the end of May, when Iceland is getting warmer and brighter in advance of July when the sun never sets. These lengthening days are bringing things to light that have been buried in darkness for a long time. Yes, the book title is very symbolic and becomes even moreso the farther one reads.

One of the ways the darkness is dispelled in this novel is by alternating chapters told in different voices. One of the voices is easily identified as that of a young Russian woman, but it takes a few chapters before the reader realizes that Hulda's backstory is slowly unfolding. Be forewarned: this is not a happy book. Hulda has had many harsh things happen to her throughout her life, and as a result she's not Little Miss Mary Sunshine. Having had some of the same things happen to me, I identified with this woman very closely-- even while I was mentally trying to tell her not to do some of the things she did during her investigation.

By the time you come to the end of The Darkness, you will realize that this series does not start out in a conventional manner. Not only that, but the story itself does not advance in a linear fashion. However, I did not find it at all confusing. No, I found it brilliant. The Darkness is marvelous reading for those who find it easier to empathize with characters. Hulda Hermannsdóttir has gotten under my skin, and I can't wait to read the next book in this trilogy.