Field of Bones by J.A. Jance 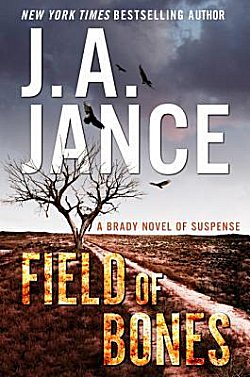 First Line: As Sheriff Joanna Brady and her reelection committee gathered in the social hall at the Tombstone Canyon United Methodist Church in Old Bisbee to await the results, everyone expected it would be an election-night nail-biter, one that would end with either a victory celebration or a concession speech.

Cochise County Sheriff Joanna Brady fully intends to stay home until every day of her maternity leave is used up, but the world seems to have other plans for her. Instead of being at home with her newborn and reading through her father's old journals, she finds that her help is desperately needed when a homicide case involving multiple jurisdictions comes to light in her county. There's a serial killer using Cochise County as his dumping ground, and there's a good chance that some of his victims may still be alive. Joanna and her entire team need to work as fast as they can.

I have loved this series since the very first book, Desert Heat, and I'm thrilled to say that this is vintage Jance. The plot, the pacing, the setting, the characters, the suspense, the humor... they all combine for a marvelous piece of storytelling that I could not read fast enough.

If you want authentic southeastern Arizona, you need to read this series. Jance grew up in Bisbee, which is where the books are set. Yes, there is a Copper Queen Community Hospital. Yes, there is a Double Adobe Road and a Skeleton Canyon. Yes, the county is bigger than some states, and the landscape and weather are often lyrically described.

But with any long-running series, the characters are the backbone. If they don't work, the books don't work. I have seen Joanna Brady grow from a widow to whom the sympathy vote gave the sheriff's office to someone dedicated to being the best law enforcement officer she can be. I've seen her go to school, make mistakes, and keep on learning. I've seen her as a mother, as a wife, and as a grieving child. And she's done it all with one of the best casts of characters backing her up.

In Field of Bones, we have multiple points of view telling us the story: Joanna Brady; Acting Sheriff Tom Hadlock; a young abducted girl, Latisha Marcum; serial killer James Ardmore; and brand-new deputy Garth Raymond. (More of Garth, please!) Even the characters whose heads we don't get into are special: journalist Marliss Shackleford is still a thorn in Joanna's side, and the human buzzsaw known as Jane Carver made me laugh (and want to stay away from her bad side). Each voice rings true, and each voice ratchets up the tension.

Field of Bones shows us Sheriff Joanna Brady as the consummate professional who never forgets her people. She also shows us the importance of having contacts throughout all branches of law enforcement. (Sometimes it really is about "who you know.") But most of all, the author herself shows us how to tell a story that can make readers laugh, cry, and want to pull the covers over their heads. And here I am... waiting for the next book in the series. I will never get enough of Joanna Brady.