Smoky the Brave by Damien Lewis 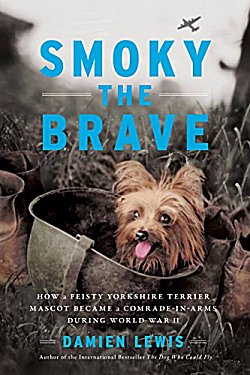 First Line: The image painted on the side of the aircraft's fuselage was eye-catching.

Japanese military advances are threatening to overrun New Guinea in February 1944. It is absolute chaos, but the discovery of a tiny Yorkshire terrier shivering in a foxhole in the jungle surprises everyone when she's brought into the base of a photo reconnaissance squadron. Adopted by Corporal Bill Wynne, Smoky quickly becomes the mascot and lucky charm for the unit, but few would believe the military career this four-pound furball would have.

The cover of Smoky the Brave is the photo that helped win this tiny Yorkshire Terrier Yank Magazine's Mascot of the Year award. She got a bath in Bill Wynne's helmet every day. Most people think of small dogs as nervous and yappy, good for taking up space on old ladies' laps but not much else. Smoky was one of the many dogs who behaved contrary to this popular misconception.

Smoky's life was truly extraordinary. She became the first recorded therapy dog when an acquaintance of Wynne's persuaded him to take the dog to visit soldiers convalescing in hospitals in Brisbane, Australia. She saved lives, learned how to parachute jump, laid cable on an airfield just seized from the enemy-- and was awarded eight battle stars. (And I'm not mentioning many of her exploits.)

I learned a lot from reading this book, especially about photo reconnaissance squadrons that would fly thousands of miles to obtain detailed photographs of enemy positions. Pilots who flew these missions were beyond brave. They flew alone. They never knew when the enemy would spot them, the conditions were freezing, and since the planes had to be as light as possible to travel such long distances, the pilots had no guns, so they couldn't shoot back in an effort to save themselves.

I'm still not completely sure how much I enjoyed this book. Lewis glossed over an event in Smoky's life that I thought could have used a bit more explanation, and his writing style is very matter of fact. As a passionate dog lover, I was expecting to be much more emotionally involved in the book than I was. Now I'm debating whether a more subjective approach would have improved the book, or would it have done a disservice to such a marvelous dog? The debate rages on in my mind. What I do know is that any dog lover is going to be glad they took time out of their busy lives to read about a creature that had more than her share of bravery and heart.