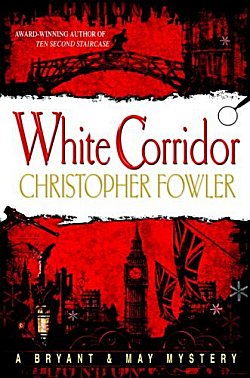 First Line: "Concentrate on the moth."

Arthur Bryant and John May are famous for solving crimes that the ordinary police cannot. How do they do it? These two "well-seasoned" officers who refuse to retire use anyone and anything from crackpot psychics to the latest in forensics. All their expertise is needed to solve this latest case: a fellow member of the Peculiar Crimes Unit has been killed inside a locked autopsy room.

The room is only populated by the dead, and just four PCU members have a key. Trouble is, the Unit has been shut down for a forced "vacation" and Bryant and May are stuck in a van somewhere in the Dartmoor countryside during a freak blizzard. The two men must not only try to solve a murder via cell phone, they must take care not to freeze to death. Furthermore, what they don't know quite yet is that a murderer is on the prowl among all the snowed-in vehicles along the road, a murderer searching for a beautiful woman and her young son.

Years ago, I read the first book in Fowler's Bryant and May series and didn't care for it at all, but always at the back of my mind, I thought there might have been extenuating circumstances. You see, I read Full Dark House while on my very first trip to the UK, and I'm pretty sure my brain was on sensory overload. I am very happy to announce that I thoroughly enjoyed this fifth book in the series, and now I'm wanting to catch up with all the adventures of these two men.

One of the small things that was so enjoyable was that Fowler increased my vocabulary. It's not often that writers use words that I'm not familiar with (and may I also add that the built-in dictionary is one of the perks of owning an eReader). Both storylines worked together extremely well. Everyone at the Peculiar Crimes Unit is used to having Bryant and May on hand to solve the crimes, but this time Sergeant Janice Longbright is in charge, and she's petrified that she's going to make a hash of it all. Then there's the young mother and son running from the homicidal maniac while the wind howls and the snow piles up. Fowler lets readers see things from several different perspectives, and my mind really got a workout trying to piece together the clues for both crimes.

As marvelous as the story is in White Corridor, the characters of Bryant and May are superb, especially if you like mysteries with flashes of brilliant humor. How old is Arthur Bryant? "Mr. Bryant is so old that most of his lifetime subscriptions have run out." One of the books in his office is Code-Breaking in Braille, and he planned the route to the psychics convention using a map printed in 1907. You'd never think in a million years that such a person could be any good at solving crimes or be allowed to get away with the things that he does. For the most part, John May is the slightly younger and steadier of the two, but at this stage of the game, May knows it's useless trying to rein in his determined partner. And as far as that "getting away with things" goes, as Fowler says in White Corridor, "The PCU got away with murder because few of their suspects ever did." And that's what it's all about, isn't it? Well, except for the fact that those two have a cell phone with a charge that seems to last till the end of time....

I am thrilled that I gave this series a second chance. Now I have fourteen books to read in order to catch up. Happy reading for me!