The Word Is Murder by Anthony Horowitz 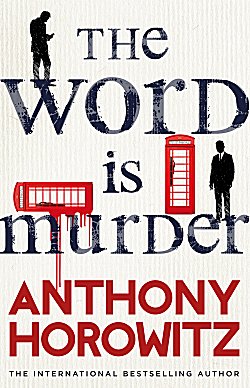 First Line: Just after eleven o'clock on a bright spring morning, the sort of day when the sunshine is almost white and promises a warmth that it doesn't quite deliver, Diana Cowper crossed the FullhamRoad and went into a funeral parlour.

Diana Cowper went into a funeral parlor and made arrangements for her own funeral. Six hours later, she was dead. Enter Daniel Hawthorne, a disgraced former police detective and absolutely brilliant investigator who's now called in to consult on cases by Scotland Yard.

Hawthorne is looking for a ghostwriter to document his life-- a Watson to his Holmes. He's looked around and has chosen Anthony Horowitz for the job. Horowitz rather unwillingly agrees and immediately finds himself drawn into an investigation-- and a story-- he cannot control. Hawthorne is impossible to work with, but this latest case of his with all its twists and turns is irresistible. The writer and the detective form an unusual partnership in an attempt to solve this most convoluted of cases.

At first, I was hesitant to pick up The Word Is Murder, for fear that "author-as-character" was simply a gimmick. I can now attest that, even if it is a gimmick, it works brilliantly. I loved this book!

As the Watson in this partnership, Horowitz deftly blends fact and fiction in letting us glimpse into his life and the worlds of publishing, acting, screenwriting, and television. Horowitz is much more accessible than Hawthorne, who's so uncommunicative that he puts his ghostwriter directly into the path of danger. (Perhaps he didn't expect Horowitz to become so involved in the investigation.)

Like Sherlock Holmes, Hawthorne can be extremely annoying; in fact, I think he has Holmes beat. My jaw dropped when Hawthorne broke into Horowitz's important meeting, and it was around this time that his behavior reminded me of stepping in something. No matter how much you twist and drag your foot, that something refuses to dislodge itself. That's Hawthorne when he wants something. (When Horowitz needs something, it's a completely different story.)

But when you put two wonderful characters together and then add a plot that resembles Russian nesting dolls on a massive dose of steroids, magic happens. I figured parts of the mystery out but came nowhere close to knowing the whole thing. Small details of appearance, of speech, of family history, of job history-- and more-- play their parts in the mystery. One small event can have implications for all those that follow, and there are always consequences. It's just a marvelous piece of storytelling.

I read that The Word Is Murder is the first in a series, and I couldn't be happier. I can't wait to see what Horowitz has up his sleeve next!