The Birdwatcher by William Shaw 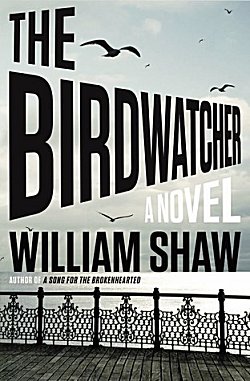 First Lines: There were two reasons why William South did not want to be on the murder team. The first was that it was October. The migrating birds had begun arriving on the coast. The second was that, though nobody knew, he was a murderer himself.

William South is a policeman and an avid birdwatcher. He is trusted and respected by all. When he's not on the job, he keeps himself to himself, watching the birds he loves so much-- sometimes with his neighbor. When that neighbor is found brutally murdered, the lead officer on the investigation is Detective Sergeant Alexandra Cupidi, a recent transfer from London. She insists on having South on the team because of his knowledge of the area and of the victim, although South learns that he really didn't know much about the dead man after all.

As the investigation progresses, all signs point to the killer being someone from South's childhood in Northern Ireland, a man who is the only person who can tie William to the past he's worked so hard to forget. The more South is drawn into the investigation, the harder he has to work to keep his own connections to the suspect, and his past, a secret.

The first four lines of The Birdwatcher are stunning. You know immediately that William South is a killer, but as you read and make your way around South's mind, you can't believe that he is. And then you learn more. And more. South is a completely sympathetic character in a vivid, atmospheric setting, tasked with finding a killer, and teamed with the questionable DS Alexandra Cupidi. I first learned about this book after reading the synopsis of Salt Lane and discovering that it was the second book in the Alexandra Cupidi series. I had a feeling that I definitely wanted to start at the beginning, so I got a copy of The Birdwatcher. I'm glad I did because I was only a few pages into the story when I knew that I was reading something very special.

It wasn't just about a mystery that keeps you guessing. It wasn't just about the remoteness and loneliness of a landscape that mirrored the mind of the main character. It was about a troubled teenage girl who proved to be the one person lonely William South could open up to. And it was about a totally infuriating lead investigator. As I read The Birdwatcher, I wondered if I really wanted to go on to read Salt Lane. You see, I couldn't stand Alexandra Cupidi. She's the type of "force of nature" that I want to head in the opposite direction from. Cupidi presumes much when it comes to William South. She commandeers his house and turns it into their base of operations, and she also turns him into a babysitter. It's almost as if she went out of her way not to endear herself to me. And it worked. But... she's a fine investigator.

I think William Shaw is a puppetmaster when it comes to storytelling. Keep your eye on him. I was completely drawn into his tale, and although the ending was inevitable, I loved the book, and nothing is going to keep me away from the second Alexandra Cupidi mystery-- not even Cupidi herself.