The Stranger Diaries by Elly Griffiths 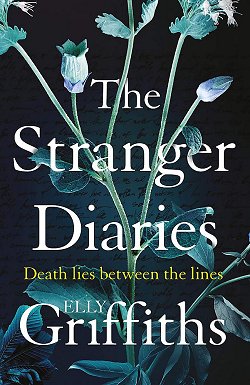 First Line: "If you'll permit me," said the Stranger, "I'd like to tell you a story."

Clare Cassidy is a literature teacher specializing in the Gothic writer R.M. Holland, who is best known for his short story, "The Stranger." When one of her colleagues is found dead with a line from the story by her body, Clare's life and her work collide head-on.

The investigating officer believes that not only do Holland's works but Clare herself hold the keys to the case, and she's determined to learn everything Clare knows. Not knowing whom to trust and afraid that the killer is someone she knows, Clare confides everything to her journal-- something that she's done most of her life. Then one day she notices writing in her diary... and handwriting isn't hers.

I've been a passionate Elly Griffiths fan since her first Dr. Ruth Galloway mystery, The Crossing Roads. I also have a long-lived fondness for Gothic novels with their creepy old houses and stalwart heroines defying the odds to uncover old secrets. When I discovered that Griffiths had written a Gothic novel, there was practically singing and dancing in the street. Once I'd turned the last page of The Stranger Diaries, I almost went outside for an encore jig.

The story is told in three distinct and compelling voices: the voice of Clare herself, the voice of her teenage daughter Georgie, and the voice of Detective Sergeant Harbinder Kaur. Woven throughout the chapters are portions of Holland's short story, "The Stranger" and passages from Clare's diaries. The differing viewpoints work together extremely well, due in part to the fact that you get to see what each one thinks of the other. For example, Georgie is much more aware than her mother Clare realizes, and Harbinder is packed to the gunnels with pre-conceived notions... and anger.

In fact, Harbinder could be considered the most fascinating character in the book; she certainly received the strongest reaction from me. Her prejudice and her anger made me want to slap her a time or two, but it also made me want to know what had happened to make her so bitter. Yes, Harbinder's evolution throughout The Stranger Diaries is one of its greatest pleasures.

Although there is often humor due to the differing viewpoints, Griffiths skillfully keeps building the suspense. There is more than one mystery to The Stranger Diaries. Yes, we have a murderer on the loose, but there is also the century-old mystery of the identity of R.M. Holland's Mariana. Holland keeps mentioning her in his letters, but... who is she? The solutions to both mysteries are excellent. I didn't deduce the identity of the killer until mere nanoseconds before the official reveal, and the unveiling of the mysterious Mariana made me laugh and smile.

If you're in the mood to spend a few hours thoroughly enjoying yourself, I know just what you can do-- pick up a copy of Elly Griffiths' The Stranger Diaries. I sincerely hope there's another Gothic novel in this talented writer's future.

Thriller/Suspense, Standalone
Rating: A+
Source: Purchased from The Book Depository.