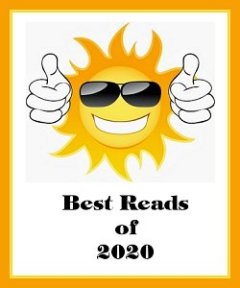 Although you can keep an eye on my Best Reads list throughout the year in one of two ways (clicking on the icon on the sidebar or clicking on Year's Best just below the blog title), I've learned that you also like to see them in a year-end post when I'm wrapping up all my reading statistics, and I'm happy to oblige. There's just something about year-end book lists, isn't there?

About the only difference between my year-end list and similar ones is that I don't post mine until after the New Year. I would imagine that sales have a lot to do with many publications posting theirs in November, but as far as I'm concerned, there's still plenty of good reading time left. I often have one "best read" in the latter part of December, and I like having a list that runs from January to December. Just call me perverse. (It wouldn't be the first time.)

Here's the list of titles that made my Best Reads of 2020. They are in chronological order, and if you click on the title, you'll be directed to my review of that book.
~~~ Best Reads of 2020 ~~~
The Hollows by Jess Montgomery
November Road by Lou Berney
The Spoilt Quilt and Other Frontier Stories edited by Hazel Rumney
The King's Justice by Susan Elia MacNeal
The Lantern Men by Elly Griffiths
Miss Seeton Draws the Line by Heron Carvic
Deadland by William Shaw
Kill the Father by Sandrone Dazieri
Disappearing Earth by Julia Phillips
Street Music by Timothy Hallinan
The Distant Dead by Heather Young
The Mist by Ragnar Jónasson
A Royal Affair by Allison Montclair
Bluebird, Bluebird by Attica Locke
A Forgotten Place by Charles Todd
Bluff by Jane Stanton Hitchcock
Absence of Alice by Sherry Harris
Even though my reading pace was on track for the year, I wound up with fewer best reads than in previous years. I'm chalking that up to ye olde COVID-19.
The other thing I noticed about my list is that there's a little something for everyone on it. A short story anthology, two translated titles, thrillers, historical mysteries, cozies, police procedurals... Eight of the seventeen are set in the United States while the rest are in places like Thailand, Iceland, England, Russia, and Italy.
Where will my Best Reads of 2021 take me? I'm looking forward to the discovery!