Kill the Father by Sandrone Dazieri 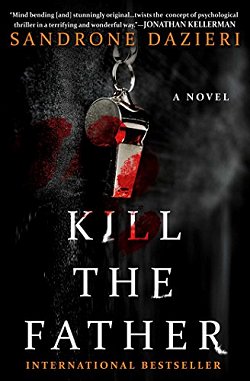 First Line: The world is a curving wall of gray cement.

When a woman is beheaded and her six-year-old son goes missing, it's a case that the police believe to be easily solved. It has to be the husband, so they lock him up and wait for him to confess. However, the chief of Rome's major crime unit has his doubts, and he coerces Deputy Captain Colomba Caselli (who's still on leave from an extremely traumatic experience) to take on an investigation separate from the police. Caselli is a warrior, and when she learns that her boss has assigned her Dante Torre as a partner, she initially wants no part of him.

Torre is a deeply wounded man who spent eleven years of his childhood locked inside a concrete silo. When he finally managed to escape, he emerged from his ordeal with crippling claustrophobia, an unquenchable thirst for knowledge, hyper-observant abilities, and the reputation among those not-in-the-know of being a complete nutcase.

All the evidence suggests that the man who held Torre captive is back and active after a decades-long absence, but the more Caselli and Torre investigate, the trail of clues becomes more and more bizarre, and they realize that what's really going on is much darker than they ever imagined.

Weighing in at over five hundred pages, Kill the Father could have used some judicious trimming, but the two main characters are so mesmerizing and the story so convoluted and compelling that the book's length was something I had to admit was a minor quibble. If you're looking for a mystery filled with the food and wine and ambiance of Italy, look elsewhere. Kill the Father is tough and gritty and all about character and story. The mystery keeps readers off-balance with its twists and turns that are all based on a real-life event. Just as you think you know what's going on, you hit a speed bump, get tossed into the air, and find yourself landing and heading off in another direction. (Prepare yourself for several "speed bumps".) I love stories that can keep me guessing, and this one certainly does.

What raises this book up to a whole different level is its characterizations. Caselli and Torre are two very flawed people, but they are also very strong, very intelligent, and very determined. With the horror of his childhood, Torre often takes center stage and rightly so. As the investigation progresses, Torre has to confront his past and wonder if what he remembers is really what happened or if he has false memories. It's been a long time since I've been so impressed with two characters as I am with Caselli and Torre.

One warning for potential readers: If you really can't stomach any harm coming to children, you might want to skip several paragraphs from time to time or decide not to read the book at all. I will say that the scenes are not graphic and that they really serve to illuminate Torre's character.

The third book in the series, Kill the King, will be released in May. I already have the second, Kill the Angel and am fighting the urge to dive right in. When you find the right combination of story and character, it's magic, and in the case of Caselli and Torre, Sandrone Dazieri is the magician.