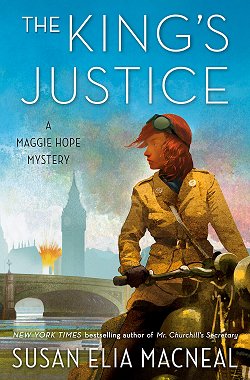 First Line: Each incoming tide of the Thames brought another layer of debris, and, when the waters receded, mysteries could be found buried in the silt.

Not many people would consider defusing bombs in London as a relaxing break from spying, but then they aren't Maggie Hope. Her war began with being Winston Churchill's secretary and her resume has grown since then. However, everything she's done has taken a toll on her.

In an effort to avoid thinking about some of the things she's done (or that have been done to her), she finds herself enjoying living life on the edge: defusing bombs, riding a motorcycle at breakneck speed on London's bombed out streets, drinking too much, smoking too much. Her friends see the change in her, but they don't know what to do.

When she's asked to look into the theft of a Stradivarius, one of the finest violins ever made, Maggie can't resist, although she found it easy to refuse to help with the manhunt for a serial killer who's targeting conscientious objectors. Little does she know that she's the only one who can uncover the connection between the robbery, the murders, and a link to her own past.

I've been a fan of Susan Elia MacNeal's Maggie Hope series since the very first book, Mr. Churchill's Secretary, and it's been a joy to watch it get stronger with each new book. The King's Justice follows this trend. As always, MacNeal can easily put us right in the middle of wartorn London by inserting facts about the Tower of London being hit during the Blitz, giving names and histories to the ravens at the Tower, mudlarking, and defusing bombs (which reminded me of watching Anthony Andrews in Danger UXB). But it was what I learned about conscientious objectors that had the most effect on me, and I really liked how it was woven into the story.

As much as I learn about World War II and the people who fought in it by reading these books, it's the character of Maggie Hope who always brings me back. She's quite simply amazing. Starting out as rather naive, she's grown so much, learned so much, and her quick wits and steely resolve have gotten her out of more than one hair-raising circumstance. The thing that I like about Maggie the most is-- regardless of what she's done-- she's not Wonder Woman. Bullets don't bounce off her. Everything she's done, everything she's experienced, has had an effect on her, and in The King's Justice, we see it all coming to a crisis point. She's got what we now call PTSD, and how she realizes it and how she works through it is one of the best parts of the book.

By the book's end, Maggie has a new adventure awaiting her, one that I'm really looking forward to. That's about the only bad thing about a wonderful series like the one Susan Elia MacNeal has created: the interminable wait for the next book. If you're new to the series, you can read this as a standalone, but I strongly advise against it. You'll miss too much just in character development alone. Start with Mr. Churchill's Secretary. (You can thank me later.) As for all you fellow Maggie Hope fans, rejoice! You've got another excellent book to savor!