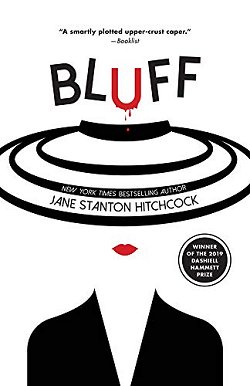 Maud Warner is convinced that accountant Burt Sklar stole her mother's fortune and left her family in ruins, but she can't prove it, and no one will listen to her. So one day she dons secondhand designer duds and bluffs her way into a swanky New York restaurant. When she leaves, a man has been shot, and "Mad Maud" is on the run.

In the years following her family's collapse, Maud has become accustomed to flying beneath the radar, especially since older women tend to be invisible. But she's learned that she has a knack for playing poker, and as a result she can turn weakness into strength and take advantage of people who think they are taking advantage of her. She's made the first move in her high-stakes plan for revenge. She fully intends to take down her enemies and get justice for their victims. Her success depends on her continuing ability to bluff.

Will she be able to win?

I've said more than once that I'm a character-driven reader, and when I picked up Jane Stanton Hitchcock's Bluff, I hit the jackpot. Main character Maud Warner's witty, satirical voice grabbed me on the very first page, and the story she told enthralled me. How deep was I under Maud's spell? I stayed up until 5:30 AM to find out how it all came down, that's how deep.

The unfolding of Bluff's plot is delicious. Part comedic heist, part social commentary, Maud's voice makes readers feel as if they're right in the heart of the action... but they're not. Maud's a poker player, and she plays her cards close to her chest. One surprise after another lays in wait, and I'm pretty sure I had a smile on my face most of the time as I read this book.

As we read, we hear Maud being called "Mad Maud," "the D.B. Cooper of little old ladies," "Grandma Moses," and an "AARP pinup," but Maud is simultaneously telling us her side of the story, so we know those epithets are the furthest thing from the truth.

Burt Sklar is the villain you want to tie to the railroad tracks. From his overuse of adverbs (that made me want to slap him each time he did it) to the repetition of his name... Sklar, Sklar, Sklar... I came to think of him as a festering wound on the rump of humanity. I was completely invested in Maud's plan for bringing him down. To continue the railroad analogy, once Sklar was tied to the tracks, I would gladly shovel coal into the boiler while Maud blew the whistle and aimed straight for this despicable excuse for a human being.

From the brilliantly designed cover to the very last word on the very last page, I loved Jane Stanton Hitchcock's Bluff. My advice? Get your hands on a copy, get your nest made, and start reading.