A Forgotten Place by Charles Todd 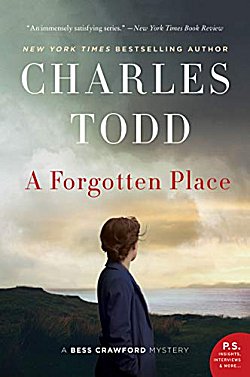 First Line: December 1918. The war had ended, but not the suffering.

World War I is over, but-- as Nurse Bess Crawford says, "...when we no longer needed soldiers, we tossed them aside like broken chairs." Now she has been assigned to a clinic for amputees, and a group of Welsh patients worries her. It's clear that they have nothing to go home to in a valley where the only employment is for the able-bodied down in the coal mines.

When their officer, Captain Williams, writes to tell Bess of their despair and of his own at trying to save his men, Bess requests leave and travels to Wales. She's too late. Most of the group is dead. Worried that Williams intends to kill himself, Bess follows him to an isolated peninsula where she's promptly deserted by her driver. Now Bess is stranded among strangers suspicious of outsiders. When she learns that the villagers are all hiding something, they do not allow her to leave, and-- what's even worse-- no one in England knows where she is. Bess must find the answers to all her questions without putting her only two allies at risk, but there is a murderer here who is driven to kill again and again...

My interest in nurses on the front lines during World War I began with the BBC's "Testament of Youth" and Lyn MacDonald's The Roses of No Man's Land. When I learned of Charles Todd's series featuring Bess Crawford, I had to get my hands on a copy. I've enjoyed the series ever since, but I have to say that with A Forgotten Place, this series has reached a whole new (and wonderful) level.

In reality, A Forgotten Place is a locked room mystery, if you can call an isolated peninsula a room. No one goes there. The police don't come there; the villagers take care of everything themselves. No one has transportation, so if anyone wants to leave, they have to walk miles and miles and miles over rough terrain. Getting letters in and out is left entirely to chance. The weather in December is atrocious, and the villagers are all suspicious, they're all hiding something, and they're Olympic gold medal winners at immediately thinking the worst of anybody or anything. It wasn't long at all before I wanted to run screaming away from the place, but I was trapped there along with Bess, and I simply couldn't leave until Bess could leave. The setting is superb and really set the tone for the entire book.

The writing team of Charles Todd always enlightens readers about a certain facet of life during World War I, and this time it's the plight of amputees. In many instances, it would have been kinder for them to have been killed in action. There were no jobs for them when they came home. Often their arrival meant even greater hardship for already poverty-stricken families. It's no wonder their suicide rate was high.

The mystery in A Forgotten Place really kept me guessing, and I got to see a side of Bess Crawford's personality that has never really been shown before-- probably because she's never been in a situation like this one. She's always going to fight for anyone who's under her care, and she's always going to fight for the right, but this time, she's also got to fight for her own survival. These villagers are willing to kill to keep their secrets. Every time Bess was forceful with these people and their well-honed complicity of silence, I wanted to cheer aloud. And was I ever glad when Bess and I finally got out of the place.

I'm really looking forward to what Bess gets up to next!

A Forgotten Place by Charles Todd