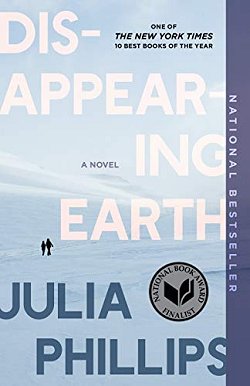 First Line: Sophia, sandals off, was standing at the water's edge.

One August afternoon in Petropavlovsk on the Kamchatka peninsula, two sisters aged eight and eleven go missing. Weeks pass, then months, and the police turn up nothing. During the next year, echoes of the disappearances reverberate throughout a close-knit community, the fear and loss felt most deeply among its women.

Julia Phillips' enthralling Disappearing Earth is told from many points of view, and it is a mother lode of riches for readers who aren't put off by the fact that the narrator changes with each successive chapter.

I learned so much about the Kamchatka peninsula-- and was led to discover even more information through additional reading. The setting, containing three active volcanoes within sight of the major town of Petropavlovsk, is stark and memorable. Traveling through a fire-ravaged wooded area, the mother of the two missing girls looks out the car window and sees her grief transformed into landscape: "The long tracks of dead forest looked like thousands of bones pushed up from their graves."

As the story runs its course from one person to the next-- all connected by the abduction of the two little girls-- we learn how the area has changed since the collapse of the USSR, how poaching has affected the ecology, how the indigenous peoples and LGBT are treated, and how difficult it can be for native people to live outside their own culture.

So far, I've concentrated on how much I learned from reading this book. Now it's time to concentrate on the story itself. Since each successive narrator is connected in some way to the missing girls, the sisters were never far from my mind. The scene describing their abduction was chilling, and as the months passed, any hope I had for their safe return died an agonizing death. There was what I call a "light bulb" moment when I knew the identity of the kidnapper, but of course, everyone in the book ignored it. And the ending? I can't decide whether to call it "jaw-dropping" or a "punch in the gut." Totally unexpected.

Disappearing Earth is an amazing piece of storytelling, one that I highly recommend you to try.