The Hollows by Jess Montgomery 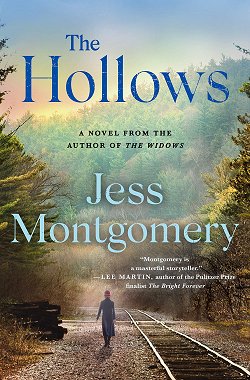 First Line: For near on ten miles, the old woman walks without ceasing.

The Moonvale Tunnel is the sort of place that lends itself to mysterious goings-on. When an elderly woman is killed along the railroad tracks by the tunnel and the brakeman tells everyone he saw a ghostly female figure dressed all in white, Sheriff Lily Ross is called in to set things straight. With the help of her friends Marvena Whitcombe and Hildy Cooper, Lily follows the dead woman's trail all the way back to a notorious asylum known as The Hollows. As Lily works to learn the truth of what happened, secrets long buried by time and the mountains begin to come to light.

The Widows, the first book in Jess Montgomery's Kinship historical mystery series, was one of my stand-out books in 2019, and it gives me so much pleasure to say that this second book, The Hollows, is now a stand-out book of 2020. I find the combination of Montgomery's evocative setting, her descriptive language, her story, and her marvelous characters to be well-nigh perfect.

Perhaps the setting speaks to me so strongly because I was raised in a small farm town that had a coal mine until the mine blew up on December 24, 1932, killing over fifty men. In reading the mine's history, I see many parallels to the mines around Montgomery's fictional Kinship, Ohio. The language used, the bred-in-the-bone lifestyle of "make do and mend" all add to the verisimilitude of The Hollows as well. As I read this slow-moving, rich story, I savored its Appalachian flavor and learned more about the attempts to unionize mine workers as well as something I'd never heard of before. Just what that is, I'll leave for you to discover.

The word "hollows" has many meanings in Montgomery's book. It's used in various terms locals use in relating to the landscape, but it also has a physical and emotional meaning-- especially to Hildy Cooper who feels like a failure when compared to her best friend, Sheriff Lily Ross. Hildy has found it impossible to break away from her domineering mother.

Lily Ross-- as well as her friends Marvena and Hildy-- show readers what was expected of women in the rather isolated mining communities of the 1920s, and these women also illustrate what can happen when women insist on breaking the molds others have forced them into. All three women can be mule stubborn, but when it comes to upholding the rule of the law for everyone, Lily joins the camp of Harry Bosch. Everybody counts, or nobody counts, and it's useless to threaten her.

And, oh, the secrets these three women uncover! Never, ever think that small towns and isolated areas are dull. Wherever humans are to be found, there are secrets, and secrets abound in Kinship and the surrounding area.

I loved this book. If you read and loved The Widows, rejoice, because The Hollows is, in many ways, even better. If you've read neither book, rejoice, because you have some excellent stories and characters ahead of you. Don't wait to get your hands on either of these books!