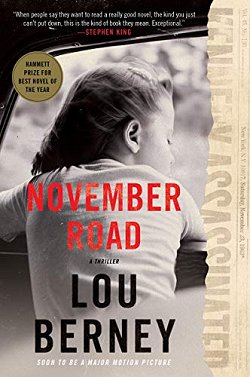 First Line: Behold! The Big Easy in all its wicked splendor!

It took a while but wiseguy Frank Guidry, a loyal lieutenant for New Orleans crime boss Carlos Marcellos, has finally learned that everyone is expendable. How? He knows too much about the crime of the century: the assassination of President John F. Kennedy.

Within hours after the assassination, people with ties to Marcello start turning up dead, and Guidry knows he's next. He hits the road for Las Vegas to see an old associate who hates Marcello enough to help Guidry vanish. When he sees a young woman with two little girls standing by a broken down car on the side of the road, he figures they'll be good cover. Marcellos' men will be looking for a man alone.

For Charlotte, Guidry's promise of help in getting a new car in Las Vegas is all-important. That car is her escape from a stifling life in small-town Oklahoma with a hopeless drunk of a husband. What's unexpected is that these two people find each other on their journey. But they're breaking an unspoken rule: a road isn't just a road, it's a trail, and ruthless killers are closing in on Guidry... and Charlotte and her two little daughters.

With writing like "...the towel could have sanded the faces off Mount Rushmore", Lou Berney certainly knows how to turn a phrase, but that's just icing on the cake of November Road. He also is no stranger to crafting a fast-paced, spellbinding story populated with fully-fleshed, memorable characters. The story is told in three voices: Frank's and Charlotte's, the two people on the run, and a hitman most refer to simply as Barone.

The circumstances revolving around the assassination of JFK are more than plausible, and some of the scenes brought back a childhood memory or two, as well as Guidry's escape route along Route 66. The cat-and-mouse chase can make your heart pump a little faster as first we learn where Guidry and Charlotte are before switching to Barone who's rapidly closing the distance between them. Part of me wanted a fairy-tale ending for Frank and Charlotte, who begin to fall in love the closer they get to Las Vegas, but the other part of me was still in the real world. Berney proved to be skilled at leading me on.

No matter how strong the story and the writing are-- and they are-- it's the characters who make November Road something special. Theodore, a black teenager who finds himself traveling with a hitman. Charlotte, in despair over her life and the life she's giving her children, changes as she makes her escape from her sot of a husband, and her two daughters, Joan and Rosemary, are easily capable of stealing the show from time to time-- a necessary lightening of the tension that builds throughout the book. But those two children are also strong characters in their own right without becoming cloying caricatures. Even Guidry, who's spent his life living in the moment for whatever pleasure he feels like experiencing, undergoes a transformation when he comes into Charlotte's orbit.

Did I get my fairy-tale ending? That's for you to find out. November Road is a marvelous book, in turn nerve-wracking, funny, heartbreaking, and almost impossible to put down. It's going to be a long time before I forget characters like Charlotte and Theodore, and it goes without saying that I'm on the lookout for more books by Lou Berney.