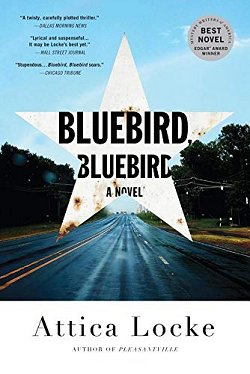 First Line: Geneva Sweet ran an orange extension cord past Mayva Greenwood, Beloved Wife and Mother, May She Rest with Her Heavenly Father.
Like most other folks who live there, Darren Mathews is well aware that East Texas plays by its own rules when it comes to law and order. That's why he moved as far away as he could... until duty called him home. Now he's a Black Texas Ranger on suspension when his allegiance to his roots puts his job in jeopardy.
Mathews travels up Highway 59 to the small town of Lark where the murders of a Black lawyer from Chicago and a local white woman have stirred up plenty of trouble. Mathews needs to solve the crimes before Lark's racial fault lines shatter. If he can do this, he can also save himself in the process.
I'm glad I waited to read Bluebird, Bluebird until now. Until the actions of #BlackLivesMatter have begun to spark this nation to change. Attica Locke takes those of us who have lived basically sheltered lives and shows us what it's really like for Blacks in the South, and it's not pretty. If you're Black, you have to navigate an entirely different roadmap from the rest of us. How did I feel as I read this book? As if I were suddenly thrown onto a different planet. As Darren Mathews walked into a bar that's home to the Aryan Brotherhood of Texas to local blind-eye law enforcement to Geneva Sweet's restaurant, I was with him, and I was on edge. You see, my way of thinking is that, if Blacks are treated like third-class citizens here in Lark, who's to say that someone who's not from these parts (even though she's white) will be treated any differently? I didn't feel any safer than Darren did, and that's a good bit of storytelling on Locke's part.
Mathews is an interesting character who certainly doesn't always do the sensible thing-- even when he knows how "the system" works in this area. Raised by his uncles, he's got a strong sense of justice, and he doesn't know when to quit. He can also see both sides of a situation: when things get tough for a white character, he can see that the man is being treated the exact same way the Black suspects were-- and that's not right.
Bluebird, Bluebird is a fast-paced intricate mystery that hooked me almost immediately, but be forewarned. If you don't like cliffhangers, this book ends on a doozy. Personally, I don't mind taking another trip up Highway 59. I have got to find out how Attica Locke continues Mathews' story in Heaven, My Home.
Bluebird, Bluebird by Attica Locke
eISBN: 9780316363266
Little, Brown and Company © 2017
eBook, 318 pages
Police Procedural, #1 Highway 59 mystery
Rating: A+
Source: Purchased from Amazon.
by Cathy at Monday, August 03, 2020