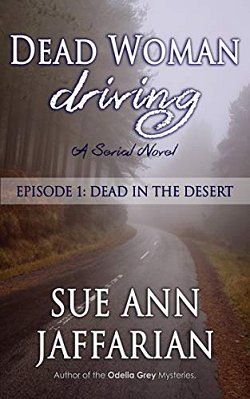 First Line: Even before she opened her eyes, Hope Callahan sensed she was moving.

Hope Callahan is no stranger to living a rough life. She ran away from home as a teen and has often found herself on the wrong side of the law. Her latest boyfriend had dreams of becoming a drug lord, and as a result, Hope is badly beaten and left for dead in the Sonoran Desert south of Tucson. Fortunately, she's found by Ozzie Byrd, a scruffy-looking old guy traveling in an RV with his three-legged dog named Punch. Ozzie has his own criminal past, but he does give Hope a chance at a new life. The question is: will she grab this once-in-a-lifetime opportunity, or run from it, trying to stay alive on her own?

I'm no stranger to Sue Ann Jaffarian's writing, in particular her Odelia Grey mysteries. I've been following her on Facebook and vicariously enjoying her life. You see, Jaffarian retired from being a paralegal, bought an RV, and has been traveling the country, sharing her adventures in photos and prose along the way. When she mentioned her new serial novel Dead Woman Driving, I knew I had to read it.

I certainly wasn't disappointed. I was so engrossed in the story that the thirty-two pages flew by. Hope is going to be an interesting character.  She's a good person, but since she's a graduate of the School of Hard Knocks, readers are never going to know what skills she has in her repertoire to confront anything her travels throw at her. Ozzie and his three-legged dog Punch were perfect companions for Hope.

Dead Woman Driving is going to be just the thing for readers who only have short periods of time in which to read. If each installment is around thirty pages, Jaffarian's intriguing storylines and well-developed characters are going to suck readers in and leave them waiting impatiently for the next installment. I know I am.