The Naturalist by Andrew Mayne 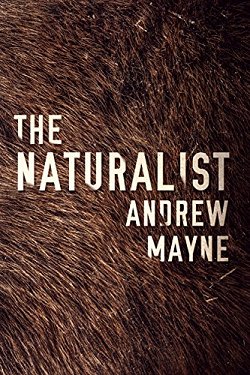 Dr. Theo Cray is a computational scientist. He sees patterns in chaos. When mutilated bodies are found deep in the forests of Montana, local law enforcement chalk it up to a rogue grizzly bear. But Cray sees something they missed.

Seeking the truth behind the death of one of his former students, Cray tries to guide the police in the right direction, but all he does is convince them that the killer is either a bear or Cray himself. Cray has to work fast before he's either thrown in prison or becomes a serial killer's next victim.

The voice of Dr. Theo Cray drew me right into The Naturalist. Cray is a wimp. He's a nerd. He has trouble relating to people because his head is so thoroughly buried in science and he spends so much time alone on field trips. Some readers' eyes may cross at all the talk of science, but I enjoyed 98% of Cray's shop talk. (Hmm... does that make me a wimpy science nerd who doesn't relate to people, too?) The science really got me into Cray's character, and it does add background to the story. The reason Cray decided to go out on a limb and hunt for his former student's killer is guilt, and that says something about his character, too. He's not all about science after all. He feels that, as a professor, he spent too much time doing things like showing and critiquing the film Avatar to get his students to like him and not enough time teaching them how to be safe on field trips in the wilderness. He's a smart guy whose heart is in the right place even though he's out of step with the rest of us. But-- as the characters in all good stories should-- Cray changes as his hunt for the killer progresses, especially when he walks into a certain diner for a meal. But I digress.

I did have a problem or two with The Naturalist, and it wasn't over the portrayal of law enforcement. When the police have a weird guy who keeps digging up bodies and telling them about what he's found, what else are they going to think? You got it: they're going to think he killed them all and wants his fifteen minutes of fame. No, the problems I had have to do with the serial killer himself and some of the action scenes at the end. I found both to be a bit over the top, although in the killer's case, I found his portrayal a bit unbelievable, not the facts behind his creation.

The Naturalist by Andrew Mayne