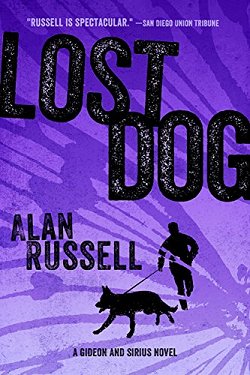 LAPD Detective Michael Gideon's K-9 partner Sirius rescues a lost dog from a pack of coyotes, but when they try to return the dog to its owner, they discover that the woman is missing.

Heather Moreland has clearly disappeared under suspicious circumstances, and the more Gideon digs into the woman's past, the more convinced he becomes that she's in danger-- that is if she's not already dead.

As he searches for Heather Moreland, Gideon is also troubled by the death of Langston Walker, the leader of a support group for the families of murder victims. The last time they'd spoken, Walker mentioned a cold case he'd reopened, and Gideon can't help wonder if reopening that case had anything to do with his death. Between trying to find the missing woman and his concerns over Walker's death, Gideon certainly has his hands full, so it's a good thing he has Sirius to help.

I continue to enjoy Alan Russell's Gideon & Sirius series, especially since this third book, Lost Dog, avoided something that had annoyed me in the previous two books. In Burning Man and Guardians of the Night, Sirius-- a normally extremely well-behaved dog-- threw a fit about something, and Gideon ignored him. Subsequently, Gideon experienced a great deal of pain for dismissing his partner's concerns. That doesn't happen this time, and that thrilled me to no end. Gideon may be a smart aleck, but he's a smart aleck who can learn.

Although I knew the identity of the killer seconds after the character was introduced, there was still a lot to enjoy in this book. The missing woman, Heather Moreland, had a very small part that still packed a powerful punch. Russell had to be economical with his words, but he delineated Heather's character so well that I actively worried about her safety all the way through the book.

I have to admit that I have a soft spot for Michael Gideon's sort of character. He's a smart aleck, and I love his use of puns and poetry, his references to movies and television, and so much more. If I don't actually laugh out loud, Gideon usually makes me smile as I read his quips.

Russell usually adds to my knowledge as I read these books, and Lost Dog is no exception. I learned about two systems installed in Gideon's patrol car: a special air conditioning system, and something called a Hot-N-Pop. If the temperature inside the car gets too high and the human does not respond, one of the doors will automatically unlock and pop open so the dog can get out. There have been K-9 deaths here in Phoenix due to the animals being in locked patrol cars, so when I read about these systems, I immediately wondered about our police department installing them.

Read a Gideon & Sirius mystery and you will learn things. You will laugh. And you will find yourself on the edge of your seat wondering if man and dog are going to save the day. Bring on book four!