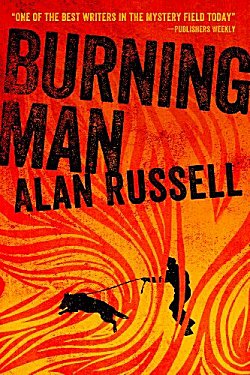 First Line: Even before I pressed down hard on the gas, Sirius was aware that something was up.

Los Angeles police officer Michael Gideon and his K-9 partner Sirius are heroes and celebrities after capturing a serial killer in the midst of a roaring inferno. After months of rehab, Sirius may not be able to resume his official duties as a member of the LAPD, but with Gideon heading up the new Special Cases Unit, wherever Gideon goes, Sirius is going to be right by his side. With the official case of a crucified teenager in a city park and the personal case of an abandoned dead baby at the foot of Angel's Flight, the two are not going to have any spare time, and that suits them both just fine.

2018 seems to be my year of reading mysteries that have detectives with canine partners. Most of these books have been excellent reads, and Burning Man continues the trend. Reminiscent of Michael Connelly, Alan Russell's first Gideon and Sirius mystery makes the setting one of the strongest characters in the book. Readers learn interesting bits of Los Angeles history along the way, and the fierce Santa Ana winds and fire add a great deal of tension.

I loved the voice of Michael Gideon as well as his sense of humor. When told that he's going to head up the Special Cases Unit, he asks, "What would I tell people? That I work in the Defense Against the Dark Arts Division?" This is a man who is still suffering from PTSD. His burns may have healed, but his mind hasn't, and being on the job is helping to keep him sane. The only thing that bugged me about Gideon was his TSTL (Too Stupid To Live) moment when he completely disregarded Sirius's behavior in a parking lot.

My annoyance was short-lived, however, because the cases he was trying to solve were too interesting. The crucified teenager put a lot of miles on Gideon's car because the dead boy wasn't who he appeared to be, and since he was popular, he had a very wide circle of acquaintances. The investigation into the death of the abandoned baby was very personal to Gideon, and it allowed readers to look more deeply into his backstory. His handling of this second case said a lot about him as a person.

Burning Man is a book in which I learned quite a few things about weather, fire, Los Angeles history, skin grafts, and the Safely Surrendered Baby Law. This fast-paced book's two investigations also kept me guessing. But it's the smart-alecky character of Michael Gideon and his dog Sirius that are going to make me reach for the other books in the series. Good stuff!