Guardians of the Night by Alan Russell 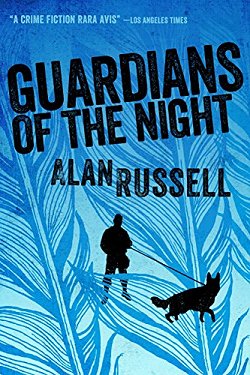 First Line: Wrong Pauley made sure no one was around before he started down the alleyway toward his burrow.

Even by the LAPD's standards, there are cases they consider bizarre, and those are the ones the two members of the Special Cases Unit work. This time around, the case Detective Michael Gideon and his German Shepherd partner Sirius are called on to investigate might even be called out of this world.

Ronald "Wrong" Pauley is a homeless man who is convinced that he witnessed the murder of an angel. Even though Gideon and Sirius are already in the middle of trying to identify the "Reluctant Hero" who braved gunfire and tackled a shooter at an elementary school, the brass wants the angel case looked into. When Pauley turns up dead, Gideon and Sirius have their work cut out for them to make sense of these crimes.

Having enjoyed the first book in this series, Burning Man, I looked forward to reading Guardians of the Night. I am one of those people who are very happy that there are more and more mysteries being written that feature working dogs.

Once again, I was treated to smart-aleck Gideon's ability to turn a phrase, and some of his acronyms are going to come in handy (NBH = Nobody Home; D-SAT = Didn't See a Thing). Readers are also treated to information and opinions on poetry, authors, and movies. I do know that I learned a lot about something important to the storyline, but I'm not going to say what it is so you can figure it out for yourself.

I like Russell's way with a fast pace and how he puts a mystery together. There's plenty of misdirection in Guardians of the Night, and you have to pay attention to almost every little thing because it will be part of the solution to both cases by book's end. I also like Russell's characterizations-- especially those of Wrong Pauley, Elle, and the Reluctant Hero.

There's only one thing that bugs me about this book: Gideon is still not paying attention to Sirius's behavior! You'd think if Gideon wound up in hot water a time or two, he'd learn that Sirius knows what he's barking about and pay attention. Maybe by book three?

With the strength of Russell's characters and storylines, you know I'll be moving on to the third book in the series. Bring on Lost Dog!