Murder at the Fitzwilliam by Jim Eldridge 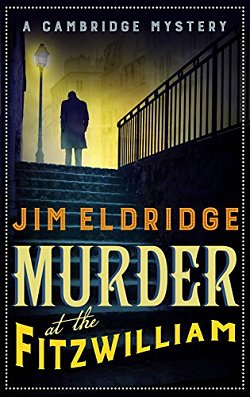 First Line: Daniel Wilson stood before the Fitzwilliam Museum in Cambridge taking in the wide stone steps that led up to the eight tall white pillars that supported the ornately sculpted frieze at the front of the building.

After making his name working on the Jack the Ripper case with Inspector Abberline, Daniel Wilson has retired from the force and is now working as a private inquiry agent. Having a reputation for intelligence and integrity, he's the first and only choice for the Fitzwilliam Museum in Cambridge when a dead body is found in a previously empty sarcophagus.

Another body quickly turns up that looks as though it's been strangled with the 3,000-year-old bandages from a mummy, and the newspapers are quick to jump on the Egyptian curse angle. Hindered by the local police but helped by Abigail Fenton, the resident archaeologist, Wilson has to unravel the mystery and find the killer in order to preserve the reputation of the museum.

Jim Eldridge has written a good solid mystery rooted in 1894 Cambridge, England that kept me guessing. Daniel Wilson, ex-copper-turned-private-investigator, is the stiff-upper-lipped good guy whose heart sings whenever he's around archaeologist Abigail Fenton. Anyone who's ever watched the film "Pretty Woman" will be familiar with the term "bum magnet," and that seems to be Abigail's claim to fame (being attracted to the wrong sort of man) because little of her talent as an archaeologist is ever really shown.

As good as the mystery and setting are, I have to admit that the two main characters really didn't appeal to me-- and there were too many unnecessary romantic flutterings to suit me. Alas, Daniel Wilson may go on to investigate murders in other museums, but I doubt that I'll be tagging along.