The Crossing Places by Elly Griffiths 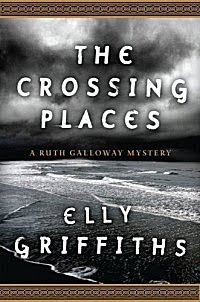 First Line: They wait for the tide and set out at first light.

Archaeologist Ruth Galloway loves her life out on the Saltmarsh in England. It's land that was sacred to its Iron Age inhabitants; a land that's not quite earth, not quite sea.

Blackpool native Detective Chief Inspector Harry Nelson has a Northerner's eye for land and hasn't a clue what anyone would see in this desolate place. All he does know is that he's been getting bizarre letters referring to Lucy Downey, a young girl who's been missing for over ten years. When he finds remains out on the Saltmarsh, he calls in Ruth to tell him the facts.

The facts are that the remains are two thousand years old, but Ruth finds herself drawn into the Downey case. She reads the letters and finds the archaeological knowledge of the writer intriguing. Then another child goes missing, and Ruth finds herself in very real danger.

The Norfolk landscape of The Crossing Places seemed like a character in this book, and it's a place of which I'd like to know more. It certainly lent atmosphere and a sense of stubbornness to the plot. The characters of Ruth Galloway and Harry Nelson were layered and interesting and a pleasure to read. Although I have to admit that the murderer in this case was as clear to me as the freckled stub nose on my face, the landscape and the characters are so interesting that I can forgive that one failing. I want to read more about Ruth as soon as I possibly can!