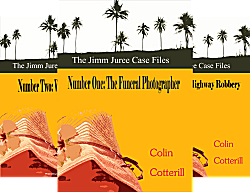 Colin Cotterill writes two mystery series that I enjoy very much: the excellent historical series featuring the national coroner of Laos, Dr. Siri Paiboun, and the Jimm Juree series set in southern Thailand. I'd noticed that there'd been no more Jimm Juree books for a while...and then in one fell swoop, I discovered a prequel (The Amok Runners) and a series of short stories that continue this intrepid journalist/ amateur sleuth's story.

I think it's the age-old publishing story of "We don't want you anymore" as far as Jimm Juree is concerned, and I will admit that the series isn't for everyone. Cotterill's humor is wide-ranging, and he's even been known to poke a bit of fun at-- gasp!-- the United States and a U.S. president or two. He also has some unique characters. One of Jimm's brothers is a transvestite computer hacker living in Chiang Mai. Another is a bodybuilder who's in love with a woman old enough to be his mother. Speaking of mothers, Jimm's is suffering from dementia, which is the main reason why everyone but the older brother moved to southern Thailand to run a run-down coastal resort. And don't forget Jimm's grandfather. He's an old retired traffic cop who is seldom seen and speaks even less, but when he does, he's usually instrumental in solving Jimm's case.

Jimm could have had a brilliant career in Chiang Mai as an investigative reporter on the crime beat, but family is all-important. She may no longer be in the big city, but she certainly doesn't have a problem finding crimes to solve, so I was happy to find out that these short stories are an on-going project for Cotterill. The Jimm Juree Case Files is a series of seven (so far) short stories, each one dealing with one of her investigations.

"The Funeral Photographer" is all about how a group of poor countryfolk seeks revenge on the rich people who swindled them. (B+)

"When You Wish Upon a Star" shows Jimm trying to find out what really happened when a man's wife dies in a car accident. (B+)

"Highway Robbery" shows how Jimm figures out a complicated armored car robbery. (A)

"The Zero Finger Option" features a series of cryptic messages that puts Jimm on the trail of a killer. (B+)

"Trash" shows what can happen when Jimm's grandfather (whose hobby is picking up trash that washes up on the beach) finds a tin can with a note inside. (A)

"Spay With Me," or how taking her mother's dog to the vet leads Jimm to solve a bank robbery. (A)

"Sex on the Beach" leads to murder on the beach, and Jimm is just the person to solve it. (B+)

All the stories are enjoyable, and all show Cotterill's talent with ingenious puzzles, humor, and a wide range of characters who prove that all people, no matter their circumstances, have value. I'm definitely looking forward to Jimm's next case.