My Guest Marva Dale Talks About the Roaring Twenties!


Life in the Roaring Twenties
From The Great Gatsby to Mobsters to Flappers and Jazz... 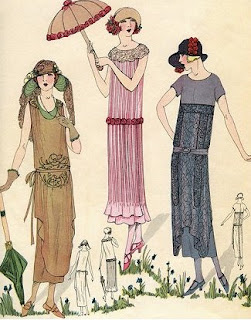 My character, Carney Brogan in Death of a Flapper experienced quite a bit of what life had to offer in the 1920s, the decade often referred to as the Roaring Twenties or the Jazz Age,  or sometimes the "Golden Age Twenties”  because of the economic boom following World War I.  The United States went through some pretty well-known and noteworthy changes in the 1920s, including Prohibition (ban on alcohol) and the Women’s Suffrage Movement which helped secure the vote for women.

Flappers were a "new breed" of young women in the 1920s who wore short skirts, bobbed their hair, listened to jazz, and flaunted their disdain for what was then considered acceptable behavior.  Flappers were seen as brash for wearing excessive makeup, drinking, treating sex in a casual manner, smoking, driving automobiles, and otherwise flouting social conventions and sexual norms.  Flappers had their origins in the liberal period of the Roaring Twenties where such dances as the “Charleston” had girls “flapping” their arms to the new jazz beat.

Flappers also began working outside the home and challenging women's traditional societal roles.  They were considered a significant challenge to traditional Victorian gender roles: devotion to plain-living, hard work, and religion.  Increasingly, women discarded old, rigid ideas about roles and embraced consumerism and personal choice, and were often described in terms of representing a "culture war" of old versus new.  Slang became prevalent amongst young people, and so did necking parties where a lot of hot and heavy kissing took place, particularly in the rumble seats of young men’s roadsters.  Flappers used the word "jazz" in the sense of anything exciting or fun. Their language sometimes reflected their feelings about dating, marriage and drinking habits: "I have to see a man about a dog" often meant going to buy whiskey; and a "handcuff" or "manacle" was an engagement or wedding ring.  Such phrases as “That's so Jake,” or "That's the bee's knees,” reflected approval and so too the popular "cat's meow" or "cat's pajamas.” 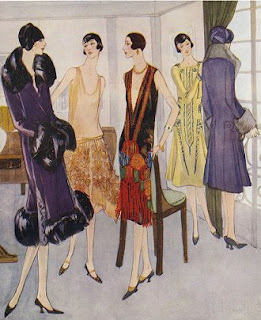 Thanks to the “boyish” look inspired by the French designer Coco Chanel, women’s dress became straight and loose, leaving the arms bare (sometimes no straps at all) and dropping the waistline to the hips.  Silk or rayon stockings were held up by garters.  Skirts rose to just below the knee by 1927, allowing flashes of leg to be seen when a girl danced or walked through a breeze.  To enhance the view, some flappers applied rouge to their knees.  High heels also came into vogue at the time, reaching 2–3 inches high.  Flappers did away with corsets and pantaloons in favor of "step-in" panties. Without the old restrictive corsets, flappers wore simple bust bodices to restrain their chest when dancing.  They also wore new, softer and suppler corsets that reached to their hips, smoothing the whole frame, and giving women a straight up and down appearance, as opposed to the old corsets which slenderized the waist and accented the hips and bust.  Adding an even more boyish look, the Symington Side Lacer was invented and became a popular essential as an every-day bra. This type of bra was made to pull in the back to flatten the chest, and flat chests soon became appealing to women.

Prohibition gave birth to speakeasies-- night clubs where booze was served clandestinely.  Bootleggers fought for territory as they sold “bathtub gin,” and this black market trade along with other illegal activities attracted a new breed of outlaw: the gangster and his mob.  In fact, mobsters like Al Capone were even idolized by the public.  And in the midst of all of this, you can bet that the way the people ate in the U.S. changed.  So when the 1920s came roaring in, food conservation was a little less of a concern and people began to indulge in the joys of life, including illegal alcohol and food that reflected this new prosperity.  Packaged, canned and frozen goods became time-savers in the kitchen.  (Advertisement for Gorton’s Cod Cakes – A delicious meal for 25¢. A new taste from the sea, and nothing to do but fry!)  Chinese food remained popular, and a dinner party menu might include canapés, crudités, soup, salad, three entrees and several desserts. 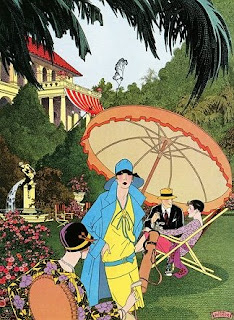 Literature also played a significant role during this time, and such authors as Ernest Hemingway, John Steinbeck and F. Scott Fitzgerald were the literary “superstars” of the day.  In his book The Great Gatsby, Fitzgerald brilliantly captured the pulse of the era-- beautiful people enjoying themselves at lawn parties and elegant soirees.

Men wore tuxedos and women adorned their gowns with feathers, sequins and spangles.  Egyptian motifs became very popular after the discovery of King Tut’s tomb in 1923.

The Art Deco style influenced interior design and architecture, and the school of Dadaism—a movement that repudiated social conventions—became prevalent in the art, music and literary worlds.   Surrealism, an avant-garde style, also flourished. 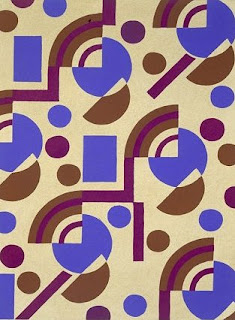 The 1920s became the era of mass production and assembly lines, and to market all these goods and services advertising agencies sprung up, particularly on Madison Avenue in New York City.  Unfortunately over-production became one of the major factors in the Stock Market Crash of 1929, resulting in the Great Depression that lasted through most of the 1930s.  Until then people could afford what had once been luxury items like cars (the popular Ford Model A) and major appliances, not to mention electricity and telephone service.

For entertainment, they went to the movies (silent until 1929) where they could see such film stars as Rudolph Valentino, Clara Bow, Mary Pickford and Douglas Fairbanks.  And radio, a brand new medium, brought music, news and programs into homes across America.

Thank you so much for this look at the Roaring Twenties, the time frame in which your book, Death of a Flapper, takes place. It's a fascinating era!