Death of a Flapper by Marva Dale 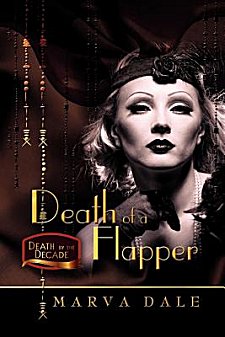 First Line: I think I fell in love with Arabella, though I'm not sure how one goes about falling for a corpse, or perhaps even a dream.

Lucille Prado knows something is wrong. She hasn't heard from her daughter in two weeks, so she asks private investigator J.C. "Carney" Brogan to find Alice. In no time at all, Carney identifies Alice as Arabella Germaine-- the ultimate flapper, a gorgeous blonde who moves in all the right circles and all the right parties. Unfortunately Arabella's body has turned up at the city morgue. Under the spell of the beautiful dead girl, Carney vows to find her killer from what turns out to be a very long list of suspects-- and some of those suspects are willing to kill to keep their secrets.

Living in a small apartment in Tin Pan Alley, Carney is an engaging young man who barely makes a living from being a private investigator. Throughout his investigation, he wonders if he knows what he's doing, if he understands what's really going on in the world around him, and this soul searching of his makes Carney a character we can all identify with. As much as I liked him, I did find Carney confusing from time to time. He comes from an underprivileged background and uses a lot of the current slang when he speaks, but he can also say things like "I don't speak elitism peppered with hedonistic euphemisms!"  This may signal hidden depths to this character, and I'm rather hoping that Carney shows up in the 1930s book in this Death by the Decade series so I can learn more about him.

As Carney worked to narrow the list of suspects, the author brought New York City in the 1920s to life. I was reminded of classic detective fiction from that era as I read about the private eye with a heart of gold searching for the killer of a beautiful young girl who'd fallen for the hedonistic lifestyle of her rich and corrupt friends. Death of a Flapper is a good, solid start to a new mystery series. I look forward to reading more.