Every Trick in the Book by Lucy Arlington 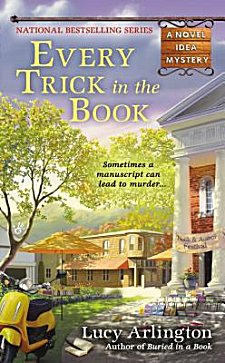 First Line: By the middle of October, the heat and lassitude of a Southern summer had finally loosed its hold over the quaint, artsy town of Inspiration Valley.

Everything's coming up roses for Lila Wilkins. Perfect boyfriend. Perfect house. Perfect job. Now a full-time literary agent for the Novel Idea Agency, Lila's been put in charge of some of the details for the upcoming Book and Author Festival in Inspiration Valley, North Carolina. She's looking forward to finding some talented new writers, but what she does find is the body of a New York City editor who bore an uncanny resemblance to Lila herself. When an author is killed, Lila has a feeling that the two deaths are linked-- and she just may have the manuscript that proves her hunch.

Having enjoyed the first book in this series, Buried in a Book, I looked forward to reading the second outing of Lila Wilkins with a great deal of anticipation. I certainly wasn't disappointed. This is a cozy series with layers, and it's a delight to peel each one back slowly.

There's a fine group of characters led by Lila herself. Her son, Trey, has asserted a measure of independence since graduating from high school, and instead of going straight to college as Lila had hoped, he's been working as part of a commune. Her mother-- who has her own business as a psychic-- is both blessing and curse to this single mother. Lila's friends and co-workers round out the cast with quite a variety of personalities and attitudes.

The mystery is a strong one in Every Trick in the Book. The creepy, pulse-raising killer is seen in flashes throughout, but what's truly puzzling is said killer's true identity and motivation for the crimes.

The thing I've grown to love the most in this fledgling series is the fact that its setting of a literary agency is more than a thin veneer used to hook readers before a fast segue way to a murder. I actually feel as though I'm learning what goes on behind those doors. In this book, more is learned about how to get a book ready for submission as Lila reads manuscripts and makes suggestions for changes to the writers. We also get to see Lila contacting editors to whom she's trying to sell the books. She's doing her best to make dreams come true, and it's fun to feel as though you're in on the process.

As hard as I try not to be any sort of snob when it comes to my reading, I think I am... a bit... when it comes to cozies. For some reason I don't seem to rate them "five star" reads as compared to the other mystery subgenres in which I regularly indulge. Cozies always seem to me to fall on the lighter, fun, read-in-an-afternoon category as opposed to the books I tend to wave under people's noses and insist they read. I think that's always been a reason why this subgenre never gets taken seriously by either the majority of the reading public or the world of publishing.

I'm thrilled to say that lately I've read two cozies that are making me rethink my attitude. Every Trick in the Book is one of them. Yes, this series may be set in a perfect little village dedicated to the arts, but there's real depth here. The characters are what you'd find in any cozy worth its salt, but there's a richness to them that you don't always see-- they face problems beyond finding out whodunit, and they are proud, contributing members to their community. The murders aren't just lessons in deduction, they point out real and oftentimes heartbreaking problems. And the setting? It's not just a marketing tool.

Every Trick in the Book is a cozy that "I-only-read-cozies" readers will love, and one that readers like me-- who love every subgenre from cozy to hard-boiled-- will sit up and say, "Hey... now this I like. A lot!"  I can't wait for book #3 in the Novel Idea series.