The Girl Beneath the Sea by Andrew Mayne 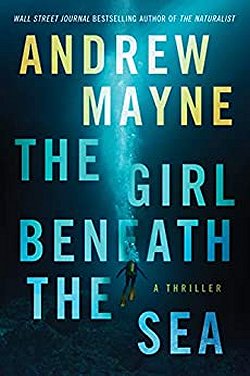 First Line: Something else is in the water.
Sloan McPherson comes from a long line of Florida treasure hunters and drug smugglers, but she's working hard to forge her own path out of her family's shadow for herself and for her daughter. Working on her doctorate in archaeology, Sloan is a police diver for the Lauderdale Shores Police Department.
When Sloan finds the body of a woman floating in a canal-- a woman Sloan knew as a girl-- all eyes are on Sloan. The police, the DEA, the FBI, all of law enforcement wonders if she's the prime suspect, and they start following every move she makes. As a result, she finds herself teamed with the one person she hates: a DEA agent who put her uncle behind bars. Together, the two are going to have to outsmart a ruthless cartel searching for a lost fortune.
~
I was introduced to Andrew Mayne's writing by his first Dr. Theo Cray mystery, The Naturalist, and when I learned that this mystery was the first in a new series about a woman police diver, I knew I had to give it a try. At the end of The Girl Beneath the Sea, I had mixed emotions... but I'm game to read the next book in the series (Black Coral, released in February 2021).
Mayne certainly knows how to tell a riveting story, even though the plot seems to be a bit far-fetched at times, and he also knows how to create a main character with a distinctive voice. The youngest child and only girl of the McPherson family, Sloan is a self-professed "alpha wolf," and it's true that her brothers do not make appearances in this book. Her shady family background in treasure hunting and drug smuggling has made her believe that she's always got to prove herself to everyone, and it's this that I had the most problems with. As an alpha wolf, she thinks nothing of putting herself in extremely dangerous situations with no backup, and I found her occasional TSTL (Too Stupid To Live) moments exasperating, especially since she's a single mother. If the story hadn't been so compelling, I would have stopped reading for this reason alone. I can't stand women who are TSTL.
However, as I said, Mayne knows how to tell a compelling story, and there are two things I really liked about The Girl Beneath the Sea: (1) teaming Sloan with DEA agent George Solar, a man she hates for putting her beloved uncle behind bars, and (2) the underwater scenes. Mayne is a diver himself, and he brings the underwater sequences to life. There's a lot of fascinating information about diving and the underwater world to be learned here, and he really had me squirming whenever Sloan was diving in those murky Florida canals. (I love the water, but I want to be able to see what's in the water with me if you know what I mean.) Teaming Sloan with George Solar puts a cap on those hare-brained solo stunts of hers and makes her grow up emotionally.
Even though the plot seemed a bit unbelievable from time to time, and even though I wanted to shake some sense into Sloan whenever she decided to dive in and save the day all by her lonesome, I do want to read the next book in the series. If Sloan continues her ill-advised ways in the second book, that's when I'll call it quits.
The Girl Beneath the Sea by Andrew Mayne
eISBN: 9781542009577
Thomas & Mercer © 2020
eBook, 328 pages
Thriller,  #1 Underwater Investigation Unit
Rating: C+
Source: Purchased from Amazon.
by Cathy at Thursday, January 07, 2021