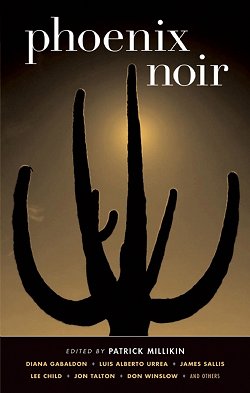 First Line: Phoenix is a young city, even by Arizona standards.

Akashic Books has become known for its series of short story anthologies set in locations around the globe, and since I'm a resident of Phoenix, picking up a copy of Phoenix Noir (from The Poisoned Pen Bookstore where editor Patrick Millikin works no less) was a no-brainer.

This collection of sixteen stories is a good one. There's only one story that I refused to finish, and that was due more to my mood than the writer's ability. Readers are taken from Phoenix in the 1940s (Jon Talton's Bull) to the here and now with characters from all walks of life.

My favorites in this collection were Lee Child's Public Transportation which had a lovely little twist at the end, Laura Tohe's Tom Snag that tells of a Native American who picks up the wrong woman at the Flying Eagle Bar, Others of My Kind by James Sallis, and Don Winslow's Whiteout on Van Buren which teaches a hitman why no one should visit Phoenix in August.

Diana Gabaldon's Dirty Scottsdale wins the prize for memorable phrases. When explaining why she was delayed in coming to the door, a woman says, "Sorry. I was drowning squirrels in the garage" (!) and then there's a perfect description of the Phoenix heat: "Yeah, it's a dry heat. Meaning that instead of being poached when you walk outside, you're flash-fried."