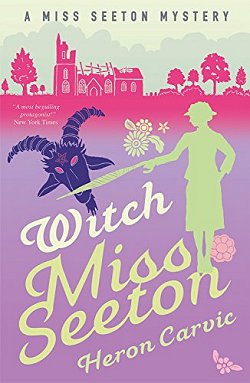 The first two books in this series (Picture Miss Seeton and Miss Seeton Draws the Line) made my Best Reads lists of 2019 and 2020. They are the perfect blend of a traditional British mystery and laugh-out-loud humor. Having read a series of lackluster stories, I felt in great need of a pick-me-up, so I reached for the third, Witch Miss Seeton, in which the elderly lady with the lethal umbrella matches wits with scammers and a satanic cult.

Compared to the first two, what a disappointment!

First off, I think there was a bit too much going on. Either focus on the scammers bilking the rich out of thousands of pounds or focus on the witches. There was food for two really good mysteries here instead of creating an overstuffed, subpar one.

The second thing that had me all a kerfluffle was that the opening part of the book dwelled on the two vicious gossips of Plummergen whom everyone calls the Nuts. These two women willfully go out to destroy people's lives and reputations, and they both have it in for Miss Seeton. To begin the story with an overload of their bile and vitriol was too much. There was only one result that could've leavened my mood, and that didn't happen.

The third thing that left a sour taste in my mouth was the fact that there was very little real humor and not enough Miss Seeton. Now that I'm done crying in my beer, I'll say that not every book in a long-running series can be a masterpiece-- and I have twenty-one more Miss Seeton mysteries to look forward to.