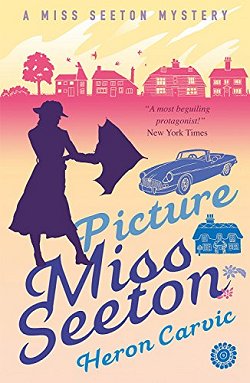 After enjoying a celebratory performance of Carmen, Miss Seeton is walking to her bus stop when she witnesses a murder. An art school teacher who is on the verge of retirement, Miss Seeton is able to sketch her impressions of the killer, but little does she know that her sketch is going to turn her into a sitting duck.

Having been recommended by someone whose opinion I trust, I was in the mood for something light and decided to try the first book in the Miss Seeton cozy series. I had no idea what I was getting myself into!

Delightful, charming, and hilarious are words that I seldom use, let alone throw around with abandon as I am doing now, but... I can't believe how much I enjoyed this book! If I didn't have any self-control, I'd be reading all the books in this series one right after the other like potato chips or cookies.

Miss Seeton is Miss Marple on laughing gas. She's a spryer Miss Marple, too, and you'll never believe the adventures she and her umbrella get into. To Scotland Yard's credit, Detective Chief Superintendent Delphick (known as The Oracle) knows that Miss Seeton's ability to identify the killer means her life could be in danger-- especially since they know who they're looking for: "...he had a nasty feeling that when she'd stuck her brolly into César Lebel, she'd stuck it into a hornet's nest." Fortunately for Miss Seeton, Delphick sees her for the astute person she is. Unfortunately, Detective Sergeant Ranger has the typical youth's opinion that she's merely a dotty old woman carrying a lethal umbrella-- but that opinion may change as the two police officers try their best to keep her alive.

Miss Seeton is about to retire, and she's inherited a nice little cottage down in a village in Kent. Wanting to try country life on for size, she moves in for a few weeks-- and she takes Delphick's murder investigation with her, little knowing how much difficulty the villagers are going to add. The people of Plummergen are a riot, even "the Nuts," Miss Nuttel and Mrs. Blaine, horrible gossips who are "the parish substitute for a Hollywood scandal sheet." As broad as the comedy may be, I'm from a small village and I recognized many of Plummergen's characters. (My village had its own version of the Nuts, among others.)

The killer tries time and again to do away with Miss Seeton. If you have a hard time understanding how murder attempts on a poor little old lady could be hilarious, all you have to do is read Picture Miss Seeton. I spent most of this book either smiling or laughing out loud. This book is light and fun and addictive. It's just what I needed, and I've decided: I. Need. More.