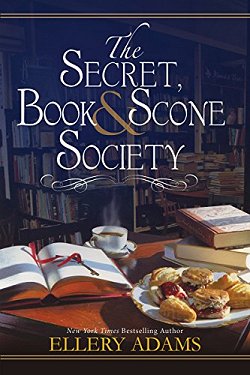 First Line: The man on the park bench stared at the empty space above the knuckle of Nora Pennington's pinkie finger.
The man on the park bench seems like so many others who visit Miracle Springs, North Carolina, hoping the the hot springs, five-star cuisine, and renowned spa can sure what ails them. But Nora Pennington, owner of Miracle Books, senses that he's different somehow, and when red-hot gossip tells her that he jumped in front of a train just a few hours later, she isn't as convinced that it's suicide as the lackadaisical police seem to be.
Nora then learns that three other women share her opinion, and-- to the hermit-like Nora's utter surprise-- she forms the Secret, Book & Scone Society to find justice for the dead man. Nora is a bibliotherapist, adept at prescribing the perfect book to ease a person's deepest pain. Hester Winthrop is the owner of the Gingerbread House and a master at baking just the right "comfort scone" for those who request one. Estella Sadler, owner of the Magnolia Salon & Spa, and June Dixon, Miracle Springs Thermal Pools employee round out the group. At their first meeting, they realize that they are all damaged in some way and that they all have trust issues-- and that the only way this group is going to work is if they each share their darkest secret, the terrible truth that brought each of them to Miracle Springs in the first place. Revealing secrets builds trust. But do they have what it takes to find the truth behind the dead man's murder?
~
I will always recommend Ellery Adams' Books by the Bay series for cozy mystery fans, even though it has a controversial ending. (A Killer Plot is the first book.) I admire Adams' willingness to risk alienating her fans in order to end her series the way she wanted to (and the ending fit the character, by the way). There can be something therapeutic about her writing and the way she deals with damaged characters. As the Secret, Book & Scone Society members reveal their secrets one at a time, a layer is pulled back, allowing us to begin to see what's behind the person's facade.
Some readers may ascribe Nora's bibliotherapy and Hester's comfort scones to some sort of magic, but I don't. I think all four women are highly empathetic, and it's this empathy that helps them arrive at the truth-- as does their belief that everyone deserves a second chance. I did despair when the local law enforcement was introduced-- the nickname "Sheriff Toad" says it all-- but I should've known better since I am no stranger to Ellery Adams' writing.
Reading The Secret, Book & Scone Society was balm for my spirit. I liked the mystery. I liked the setting. Most of all, I liked Nora, Hester, Estella, and June. I know that reading the second book in the series is in my future.
The Secret, Book & Scone Society by Ellery Adams
eISBN: 9781496712394
Kensington Books © 2017
eBook, 322 pages
Cozy Mystery, #1 Secret, Book & Scone Society mystery
Rating: B+
Source: Purchased from Amazon.
by Cathy at Monday, November 23, 2020