The Bafut Beagles by Gerald Durrell 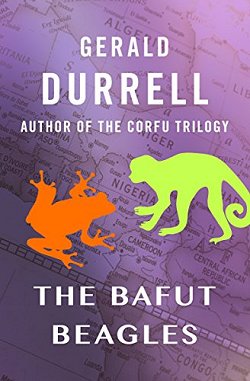 First Line: The Cross River picks its way down the mountains of the Cameroons, until it runs sprawling and glittering into the great bowl of forest land around Mamfe.
In 1949, Gerald Durrell went on an expedition to collect rare animals in the British Cameroons in West Central Africa. Once in his chosen destination, he finds himself developing a good working relationship with the Fon of Bafut, a local ruler who likes a man who can hold his liquor. Durrell is soon undertaking many hunting trips with a group of local hunters and their motley pack of hunting dogs all of whom are called the Bafut Beagles.
~
The Bafut Beagles, like other installments of Durrell's endeavors in animal conservation, is filled with wonderful anecdotes of the animals he captures and his experiences with the local people. His sense of humor when describing some of the mishaps he has with the people and animals is laugh-out-loud funny, and his sense of wonder at the awe-inspiring scenery is extremely evocative. Unfortunately, I did not find this book to be quite as enjoyable as others of his that I have read, and my reaction boils down to two things: a heavy hand with pidgin English, which made my head hurt whenever I had to translate large sections, and the slight note of condescension I detected whenever Durrell spoke about the locals, although he did occasionally praise them.
Even though I did have trouble with those two things I mentioned, I still enjoyed the book-- especially since I'd just returned from a trip to a local zoo where I'd seen three or four species of animals that the author talked about in the book. I look forward to reading more of Durrell's work in animal conservation.
The Bafut Beagles by Gerald Durrell
eISBN: 9781504042826
Originally published in 1954.
Open Road Integrated Media © 2017
eBook, 206 pages
Non-Fiction, Standalone
Rating: C+
Source: Purchased from Amazon.
by Cathy at Monday, November 23, 2020