A Killer Plot by Ellery Adams 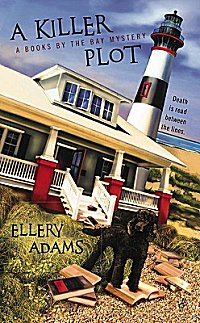 First Line: Two of Oyster bay's lifelong citizens were in line at the Stop 'n' Shop, gossiping over carts stuffed with frozen entrees, potato chips, boxes of Krispy Kremes, and liters of soda when Olivia Limoges breezed through the market's automatic doors.

Olivia is no stranger to gossip-- she's been its regular subject ever since she came back to town. Preferring her own company and that of her dog, Captain Haviland, to most townspeople, she works on her novel in solitude. Writer Camden Ford has to turn on all his charm, but he finally gets Olivia to agree to join the Bayside Book Writers group. Just when she seems on the verge of making new friends, people begin turning up dead with poems left by the bodies. Anyone with the gift of language becomes suspect, and it's up to Olivia to catch the killer before she meets a poem with her name on it.

There seems to be more and more cozy mystery series using the North Carolina coast as a setting, and I don't mind a bit. This first entry in the Books By the Bay series has so much to recommend it.

I loved Captain Haviland, the black standard poodle. So many people only know poodles from seeing them in the show ring, and I for one can testify that you don't have to keep them groomed in those ridiculous styles-- plus they're some of the most intelligent dogs on the planet. (Yes, I'm a former poodle owner!)

I also loved the new bookstore in town, Through the Wardrobe, and really enjoyed the secondary characters. Olivia proved to be a fascinating main character. She's used to having money and spending it, so it was interesting to see how she used it in her own small hometown which relies so heavily upon tourism. So much of the time she was very prickly and aloof which made it difficult to warm up to her, but she's an onion that has to be peeled back a layer at a time. The more she interacts with the other characters, the more approachable she's going to get.

I'm going to enjoy peeling back those layers as this series progresses!