Apprehend Me No Flowers by Diane Vallere 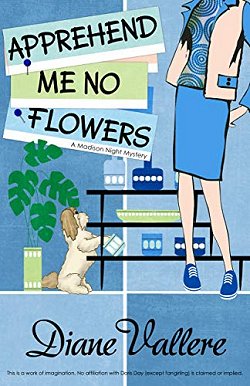 First Line: The flowers were a nice touch.
Madison Night's interior decorating business is on hold due to a lawsuit. Warned away from doing the slightest thing that could possibly pertain to her business, she's at her wit's end. It's just not normal for her to have nothing to do. That changes when she and police captain Tex Allen have a picnic in the park and Madison finds a body. Then Allen gets word that there's a second body on the other side of the park.
The bodies are unidentifiable and bad weather ruined both crime scenes. Now Madison definitely has something to keep her busy, but when the case is solved, will she have a business to go back to?
~
Apprehend Me No Flowers lacks the punch and sparkle of previous books in this series that I love, but it's still an enjoyable read. It introduces a new character, Imogene, the new receptionist (and wannabe mystery writer) at the police station, and I hope to see more of her.
With Madison's interior decorating business Mad for Mod out of commission, I did find that I missed the creativity it always brings to the series, even though mid-century modern furnishings aren't my favorite. Vallere has a knack for writing about this style that draws me right in-- reminding me of some of the furniture my mother had as well as the movies of Madison Night's hero Doris Day.
One thing that Apprehend Me No Flowers used to very good effect is how so many police stations are fighting to deal with big budget cuts while all the rich folk are still demanding them to be at their beck and call. Some of the difficulties Allen's station was experiencing kept me from putting all my little grey cells to work on the identity of the killer, and that's a good thing.
This seventh book in the Madison Night series may not have the pizzazz of previous entries, but that doesn't keep me from looking forward to book number eight. I love the character of Madison Night, and I think many of you will, too. In fact, if you haven't tried this series, start with the first book, Pillow Stalk, so you don't miss a thing in character development. Don't let the covers mislead you: Madison Night isn't all froth and fun; she can be a bit edgy, too. There's a lot more to the series that meets the eye. Give it a try and find out for yourself.
Apprehend Me No Flowers by Diane Vallere
eISBN: 9781939197863
Polyester Press © 2020
eBook, 252 pages
Cozy Mystery, #7 Madison Night mystery
Rating: B
Source: Purchased from Amazon.
by Cathy at Monday, November 16, 2020