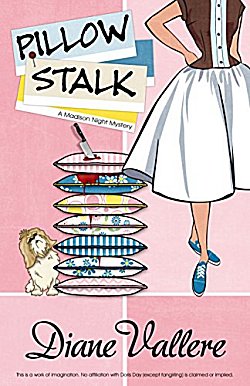 First Line: "Mr. Johnson, I'm calling to discuss the disposition of your mother's estate," I said into the yellow donut phone.

Interior decorator and landlord Madison Night dresses in vintage style in homage to her favorite actress (and life coach) Doris Day. Her estate sale wardrobe even highlights her resemblance to the actress. But when a killer begins targeting other women who also look like Day, what makes Madison unique could also make her very dead.

Police detective Tex Allen connects these current murders to a twenty-year-old cold case, and this puts Madison's contractor right at the top of the suspect list. Not trusting the police detective, Madison decides that she's going to do whatever it takes to clear her contractor's name-- and get herself out of a killer's crosshairs.

I came at this series backward, beginning with the fourth (and to date the current book) The Decorator Who Knew Too Much. I loved that book so much that I gathered up the first three to read them, too. After reading this first book, my enthusiasm for this series has only increased. The covers and the talk of Doris Day make this series sound much cuter than it is. Yes, there is charm to be found in the pages, but Diane Vallere's Madison Night series has unexpected depth and an edge to it that really appeals.

I like the main character-- and not just because we both have bum knees. Madison is in her late forties. She's independent and intelligent. This woman also has a very strong sense of empathy. When her contractor Hudson James becomes Suspect #1, she puts herself in his shoes to try to understand his behavior. And-- although she doesn't like the police detective at all-- when she learns something surprising about Tex Allen, she does the same thing... puts herself in his shoes to understand him better. I like this facet of her personality.

Animal lovers should know that dogs and cats are well-represented as they should be since Doris Day has always been an animal rights activist. Madison's Shih Tzu puppy, Rocky, never met a lamp he didn't like. To pieces. And I have no fondness at all for Hudson's cat Mortiboy-- but that's just me.

This series is giving me an even greater appreciation of Doris Day, and the double-pronged "hooks" of the actress and Madison's mid-century modern decorating business blend into the story very, very well. How about Pillow Stalk's story? It's not often that a mystery stuns me, but this one had me gasping and thinking, "Whoa! I didn't see that coming!" (And not once, but twice.)

The only thing that didn't sit well with me was the ending. I thought it strained credulity a bit, but I did really like the fact that the "bad guy" was hiding in plain sight. Diane Vallere's Madison Night series has, within the space of two books, become one of my favorites. I'm wanting to speed through the remaining two books, but I will pace myself. Honest!