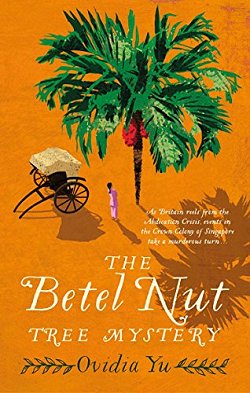 First Line: What we came to think of as the betel nut affair began in the middle of a tropical thunderstorm in December 1936.

The gossip mill in Singapore is all abuzz with the news of King Edward VIII's abdication to marry American divorcée Wallis Simpson, and as a Crown colony, it's no wonder that the city views the arrival of the Honorable Victor Glossop and his rich American widow Nicole Covington with a bit of suspicion. But the wedding certainly doesn't go according to plan when Glossop is found dead, his body covered in bizarre symbols and betel juice.

Chen Su Lin, now the secretarial assistant to Chief Inspector Le Froy in Singapore's newly formed detective unit, has dreams of becoming a journalist, so investigating murder amidst the rich and shameless suits her splendidly. Reluctantly becoming a chaperone to the temperamental (and self-proclaimed black widow) Nicole Covington, Su Lin is determined to get the truth out of her somehow, but as the observant young woman uncovers secrets and more deaths occur, she realizes that she may not be able to save her own life, let alone Nicole's.

The Betel Nut Tree Mystery is the second book in Ovidia Yu's highly enjoyable Crown Colony historical mystery series set in 1930s Singapore. Written as a memoir, Chen Su Lin recounts her adventures as a young woman who begins as a governess to the governor's children and now is the secretarial assistant in the newly formed detective unit of the police. I'm glad this is a memoir because one of the menacing elements in the book is the growing power of Japan in the area, a very real and present danger that the government of Singapore is ignoring, so it's very good to know that Su Lin survives that.

The books are told in Su Lin's voice, and she draws me right into the story with her observations and wry humor. This young woman had polio as a child and as a result has one leg that's shorter than the other-- something that marks her as very bad luck to traditional Chinese. Fortunately, Ah Ma, Su Lin's grandmother, pays no attention to this and has made sure that Su Lin has gotten a good education. Su Lin originally thought her indomitable grandmother saved her just to be perverse, but she's slowly learning the truth as the series progresses. The Chen family in Singapore has many fingers in many pies, most of them illegal, and that not only adds spice to the story, but it also gives readers the Chinese viewpoint of what's happening in Singapore. It doesn't hurt that Su Lin can get help from them in an investigation from time to time either.

The author's portrait of rich, entitled Americans is brilliant and reminds me of some things that are happening today. What's even better, Ovidia Yu can take stereotypical portraits like that of Nicole Covington, spoiled brat extraordinaire, and Su Lin's best friend starstruck and romance hungry Parshanti, and give them depth, make them real.

The mystery is a good one, although if you have a finely tuned slime meter like mine, you'll be able to deduce the killer's identity. That doesn't matter much, however. What does matter is that Ovidia Yu's Crown Colony historical series is equal parts fun and informative, with a main character who's so very easy to care about. Bring on book three!