A Beam of Light by Andrea Camilleri 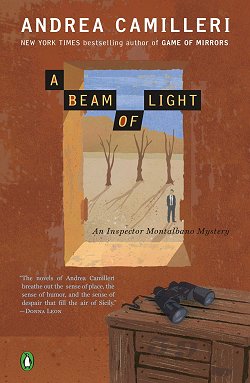 First Line: Since the first light of dawn, the morning had shown itself to be erratic and whimsical.

The weather is causing the irascible Inspector Salvo Montalbano to have strange dreams, and his mood is further hampered by the appearance of a beguiling art gallery owner. In fact, he's so bewitched that his relationship with the fiery Livia may be in danger. Personal life aside, Montalbano has to deal with the assault and robbery of a merchant's young wife and a search for arms traffickers. It's no rest for the weary.

A Beam of Light is vintage Camilleri. From the inimitable Catarella's knowledge of Latin to Montalbano's "friendship" with a crab down at the end of the jetty, Camilleri knows how to make readers laugh. Food also plays a mouthwatering part in the proceedings. One of Montalbano's most important indulgences is food. The man breaks into a cold sweat when someone else chooses the restaurant. It's true!

But before you think everything is played for laughs, think again. The meaning of the book's title is so poignant that it may make a tear come to your eye. There are three cases that Montalbano and his team must solve, and-- as always-- it is so enjoyable to watch the inspector's mind work as he investigates and begins to put everything together.

I've been slowly savoring each book in this series, knowing that it would inevitably come to an end. If you haven't read a Montalbano mystery, grab one. The purist in me suggests that you start at the beginning with The Shape of Water, especially if you're in the market for a long-running, high-quality series that will keep you laughing, keep you guessing, and keep your mouth watering. Worried about books in translation? Don't be. Stephen Sartarelli is a master of his craft. You're in good hands with Camilleri and Sartarelli. Come on... take a trip to Sicily!

A Beam of Light by Andrea Camilleri

Translated from the Italian by Stephen Sartarelli.