The Bone Seeker by M.J. McGrath 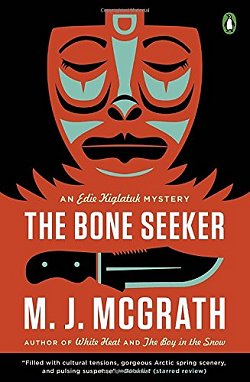 Teaching summer school in the Canadian Arctic, Edie Kiglatuk is shocked when her favorite student, Martha Salliaq, is found dead in nearby Lake Turngaluk. Edie promises the Inuit girl's family that she will uncover the truth and enlists the aid of Sergeant Derek Palliser of the Ellesmere Island Native Police. While they begin their investigation, lawyer Sonia Gutierrez is working hard to overcome obstacles concerning the cleanup of Lake Turngaluk, but she's beginning to think that there is a larger conspiracy involved. What the three of them don't realize is that, while they're unearthing long-buried secrets, they're also putting their lives at risk.

M.J. McGrath's Edie Kiglatuk series ended at three books, but as far as I'm concerned it could have continued for much, much longer. The three books (White Heat and The Boy in the Snow are the first two) not only have absorbing mysteries to solve, they also give readers a vivid, fascinating picture of life in the Arctic Circle and of the Inuit culture. (Please do not call them "Eskimos" because that word means lice in another language.)

It's summer in the Arctic, and one of the things McGrath has her characters show us is how people deal (or don't) with twenty-four-hour-a-day sunlight. Camp Nanook is a summer military encampment not far from the village where Edie is teaching, and I was shocked to learn that "...thirty per cent of Arctic postings returned to the south with some kind of mental disorder." Scary stuff, right? The mystery is a good brain teaser for armchair sleuths since it involves the history of the Distant Early Warning line formed by Canada and the U.S. during the Cold War. Not only are there Inuits involved in Martha Salliaq's murder, but readers also have to navigate suspicious governmental goings-on.

The investigation is hampered, as always, by the government consistently giving the Inuit the short end of the stick. Edie and Sergeant Palliser have to wait days to receive extra help such as the most basic forensics equipment, and all the while, officers in nearby Camp Nanook are working in the shadows to find out what Edie and Palliser know-- and how to prevent them from learning anything more.

The Bone Seeker benefits from an exceptionally strong cast of characters. Derek Palliser, derisively called "Lemming Police" by the locals, finds himself upping his game in light of Edie's passion for the truth even though he's hampered by insomnia. Edie's hunting skills translate well into a homicide investigation, and well, she's just a force of nature. "Only set of rules I know is mine...And I don't have any." A welcome addition to the cast is the lawyer Sonia Gutierrez from Guatemala. She has her own shadowy past, and after working for years on a lawsuit to force the government to clean up this area of Ellesmere Island, scarcely anything gets past her razor-sharp intellect and unflinching gaze. Whatever you do, don't mess with Edie and Sonia!

There's more than meets the eye to the title of this book, and when you come to that part (as I hope you will), you may find a chill running down your spine and a tear in your eye. The Bone Seeker works well as a standalone, but if you love mysteries with strong unconventional characters and learning about other cultures, I highly recommend that you read all three books in order. Then you will join me in wishing Edie Kiglatuk would appear to solve another mystery up at the Arctic Circle.

The Bone Seeker by M.J. McGrath