Murder in the Piazza by Jen Collins Moore 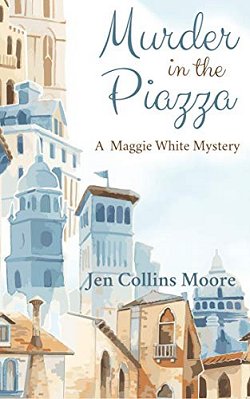 When Maggie White's husband was offered a job in Rome, she welcomed the change of scene with open arms. A recently downsized marketing executive, she is still feeling humiliated, and for the first weeks of their life in Rome, she takes courses to familiarize herself with the Eternal City. But when she wants an actual job, she discovers that it's almost impossible to find one-- until she meets Lord Philip Walpole who hires her for his Masterpiece Tours Company.

It doesn't take her long to find out that Lord Philip is a nasty piece of work, and when he's found shot to death in his penthouse, Maggie's thrown into the deep end of the investigation. She's got a palazzo full of guests, most of whose behavior would put them on anyone's suspect list, a valuable painting her boss might have stolen, and a policeman who has decided that she's the prime suspect. All that, and she has a tour to keep up and running while she's trying to clear her name.

One of these days, I'm going to travel to Italy, but until that happens, I have to be satisfied with being an armchair traveler. On that score, Murder on the Piazza, the first Maggie White mystery, delivers a feast. The Rome setting is superb, and I really felt as though I got to know the city. I also appreciate art, so being in the midst of a tour that includes sightseeing in art museums and classes on painting was right up my alley. If only my reaction to the characters and the mystery itself had been as positive.

I found the whodunit aspect of the book to be easily solved. I could say why but don't want to run the risk of spoiling the book for anyone who decides to read it. As for the characters, I wish there had been more actual interaction between Maggie and Lord Philip. Being told how nasty he was in brief snippets here and there doesn't pack as much punch as actually "experiencing" it myself. Let me stand in the room with those two and see the man in action. Moreover, I feel that readers' enjoyment of Murder in the Piazza is probably going to hinge on how they react to the main character, Maggie White, and that's where I had a problem.

I found Maggie to be extremely judgemental, and it really put me off. She reminded me of so many executives I've not had the pleasure of dealing with who would swan into my store with their entourages, take a few seconds to glance here and there, and then proceed to rip everything apart. To them, perception is everything even though we all know how deceiving appearances can be. One thing that I found puzzling about Maggie is that she also seemed to judge people's breath. What's up with that? Does having cigarette smoke on your breath mean you're automatically a villain? This woman is so used to being large and in charge that she thinks she knows how to run everything, and the major reason why she becomes the prime suspect in Lord Philip's murder is that she keeps getting in the police detective's face and telling him useful information that usually implicates herself. If she didn't think she knows better than everyone else, she wouldn't be in such a pickle. This is probably supposed to be funny, but my funny bone was unmoved.

Even though Maggie and I would not get along in real life, I am happy to say that Murder in the Piazza is wrapped up in such a way that I'm almost tempted to read the next book in the series. Will I? I haven't quite made up my mind.

Murder in the Piazza by Jen Collins Moore