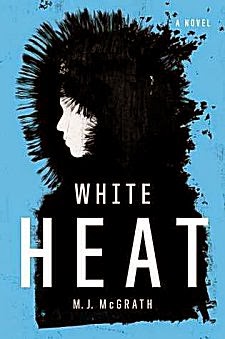 First Line: As she set a chip of iceberg on the stove for tea, Edie Kiglatuk mulled over why it was that the hunting expedition she was leading had been so spectacularly unsuccessful.

Half Inuit Edie Kiglatuk is a part-time teacher at the local school and also guides hunters out into the  Canadian Arctic that she knows so well. She's working hard to help her stepson Joe Inukpuk pay for his nurse's training. When one of the hunters she's guiding is shot and killed, her carefully balanced life begins to teeter. The Council wants to call it an accident, but Edie and police sergeant Derek Palliser are suspicious. Then the other hunter goes out into the tundra again and disappears. Regardless what the Council says, Edie is determined to find out what's really going on.

White Heat is one of the best evocations of place that I have read in a long, long time. I'm fortunate that I decided to read the book in the summer; otherwise, I might have gotten frostbite. McGrath paints a fascinating portrait of the Inuit people high up in the Canadian Arctic: what the typical village is like, the typical home, transportation, medicine, education, Inuit customs and history, and more. All this information blends seamlessly into the story. Some of the information is disturbing, some of it makes good appetite suppressants (I'll never visit the area to sample its cuisine), and all of it is fascinating.

Add in an intriguing mystery that has everything to do with the landscape, a remote chapter of its history, and bad guys whose motives are unclear, and you've got two-thirds of an excellent mystery.

The final third is the cast, and McGrath has created two very memorable characters in Sergeant Derek Palliser and Edie Kiglatuk. Palliser falls in love with the wrong women and spends a lot of time studying lemmings instead of doing police work, but that doesn't necessarily have a lot to do with how well he does his paying job. This man has depth.

What Edie Kiglatuk has goes way beyond mere depth. This woman is an ex-polar bear hunter-- one of the best in the entire area before she began drinking too much. To be a polar bear hunter, you have to be smart, you have to be able to think and react quickly, you have to know your terrain, and you have to be brave. Edie is all of these. She's also an excellent teacher, and I loved the scenes showing how she manages to teach her class of Inuit children how to survive in their own world as well as the world of the white man. If Edie has a flaw, it's her emotional entanglements, and those can and do lead her astray.

After reading the digital short story "Edie Kiglatuk's Christmas," I had the feeling that I would really enjoy the series, so I'm very glad I bought the first two books. When I'm ready to risk fictional frostbite once again, I have the second book, The Boy in the Snow, waiting for me.