The Hatpin Menace by Kerry Segrave 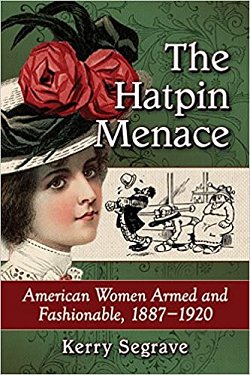 First Line: Before there were wars over hatpins there were skirmishes over big hats.
The fashions of bygone eras have always piqued my interest, so when I came across The Hatpin Menace, I had to know more. 1887-1920 was the era of Big Hair and Big Hats, and the only way to fasten these wagon wheel-sized monsters of the milliner's art to a woman's head was through the use of hatpins. The bigger the hat, the more hair extensions, and the longer the hatpin.
It wasn't long before men began complaining that, if they went to the theater or opera and sat behind a woman wearing one of these huge hats, they had no chance of being able to see the stage. (I can't say as I blame them; I'd have a bit of a hissy fit myself.) When hatpins that were well over a foot long came into use, some of them extended over six inches past the crown of the hat on either side. Get on a crowded streetcar or other conveyance and be next to a woman wearing this headgear and fasteners, and you could easily get jostled and have your eye put out. A lot of men began insisting that something must be done.
This small book (the last quarter of which is footnotes and bibliography) is divided into chapters headed Big Hats, Hatpin Fashion, The Hatpin as an Offensive Weapon, As a Defensive Weapon, Group Use, Accidental Use, The Hatpin Abroad, and The Agitation, Hysteria, Crusades, and Legislation Against the Hatpin. As you can see, it's "All Hatpins All the Time" even though the entire controversy ended up being a storm in a teacup.
I did find some of the information interesting, but when all was said and done, it all added up to overkill. Each chapter was basically an exhaustive list of newspaper articles that fit the chapter heading. After a while, it became repetitive and boring, and my eyes began to cross. However, I certainly know a lot about hatpins now!
The Hatpin Menace: American Women Armed and Fashionable, 1887-1920 by Kerry Segrave
eISBN: 9781476622170
McFarland & Company, Inc. © 2016
eBook, 220 pages
Non-Fiction, Standalone
Rating: C
Source: Purchased from Amazon.
by Cathy at Wednesday, August 05, 2020