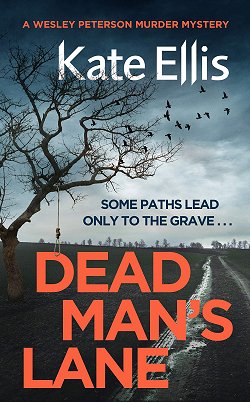 First Line: Linda Payne knew how to die convincingly.
Strangefields Farm is being turned into a luxury holiday village, and developers are hoping that everyone forgets that a notorious serial killer named Jackson Temples used the farm as his base to lure young girls there. The developers' hopes are dashed when a skull is found in the old house. Then a florist is found murdered in an echo of Temples' crimes. Detective Inspector Wesley Peterson fears that a copycat killer is on the loose-- especially when a second murder in a nearby village appears to be linked.
When Peterson's friend, archaeologist Dr. Neil Watson, begins uncovering the secrets of Strangefields' grisly past, it seems that an ancient tale of the dead returning to torment the living might not be as fantastical as it seems. Wesley is going to have to work fast to discover who's behind the recent murders before more people lose their lives.
Dead Man's Lane is yet another deeply satisfying mystery from the talented Kate Ellis. Her Wesley Peterson police procedural series always features dual timelines: one in the present and one in the past, both of which involve the same location. I always learn something new when I read a book in this series. This time as the sinister past of Strangefields Farm was revealed, I learned about deviant burials.
I do admit that I had to smile when I learned that developers were turning the former home of a serial killer with an address on Dead Man's Lane into luxury holiday homes. I mean, what could possibly go wrong? And as usual, I had to deduce how the historical timeline of Strangefields tied in with what was going on in the present. I love how Ellis ties everything together. Do the present-day murders tie into what Jackson Temples did? Did Temples actually kill those girls? Did one of the developers actually see a man reported to be dead? Who's robbing local elderly residents? What, exactly, does the history of that farm have to do with what's happening? In Dead Man's Lane, identity is key. Do we really know who all these people are? The journey to enlightenment is an enjoyable one, as it normally is with a Wesley Peterson mystery.
If you're in the mood for a character-, history-, and mystery-rich read, Dead Man's Lane is it. If you're in the mood for a long-running, high quality mystery series in which the cast of characters become friends and family, start at the beginning with The Merchant's House. I will never intentionally miss reading a book in this series. In fact, I've already started reading the next one!
Dead Man's Lane
eISBN: 9780349418278
Piatkus Books © 2019
eBook, 352 pages
Police Procedural, #23 Wesley Peterson mystery
Rating: A
Source: Purchased from Amazon.
by Cathy at Thursday, August 06, 2020