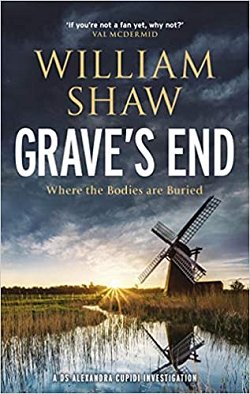 First Line: There have always been a few people here, coming and going, passing through, usually in the company of dogs.
The body of a naked man has been found in a freezer in an empty country house. The man is identified as Vincent Gibbons, a man well-known to Detective Sergeant Alexandra Cupidi's seventeen-year-old daughter Zoë who is a staunch animal rights activist.
Could Gibbons' death have anything to do with the Whiteland Fields real estate development which is scheduled to build hundreds of new houses in a bucolic area filled with wildlife? Cupidi's investigation will lead her to Whitehall and meetings with ministers, to local resident Frank Collins who was arrested for badger baiting, and to the past history of Thornhead, a boys boarding school. All this will also lead her straight into the path of danger.
I had read that this third book was the last in a trilogy featuring Alexandra Cupidi, and I sincerely hope it's not. Shaw has captured my imagination with his atmospheric setting in the Romney Marsh area of southeastern England, with his characters, and with his stories.
In Grave's End, the characters are marvelous. I have to admit that my favorite is an old badger, for those animals figure prominently in the book. I was amazed at how much I learned about these creatures-- and by how much I looked forward to the old badger's voice. (No, he's not a talking badger, but we do get to see Whiteland Fields and the other characters through his eyes.) The main cast of characters is so well-drawn that they are beginning to feel like friends, yet another reason why I don't want Shaw to stop writing about them. Jill Ferriter is even more opinionated, probably because she's trying to find a decent man to have a relationship with. Many of her opinions are completely at odds with mine, but I like her anyway. Ex-cop Bill South is now working for an ecological survey company, and watching this loner letting Alex and Zoë into his life is both touching and humorous. Zoë is now a deeply committed ecological activist. If you're going to do something that will hurt any sort of wildlife, expect her to get right in your face and not move. It's also fun to watch city girl Alex Cupidi's attitude change toward the countryside. Will she ever completely adapt? I'd like to find out.
It's a joy to watch all the pieces of this intricate mystery come together. For me, the only thing that marred Grave's End was a TSTL (Too Stupid To Live) moment Alex had at the end, although, yes, it does show that when she's intent on solving a case, she puts blinders on to almost everything else around her. And how can readers not love a book that contains this bit of dialogue between Alex and Zoë: "How come you know all this...stuff?" "I read books, Mum...You should try it sometime."
This is one of the most compelling series I've read in a long time, and I urge you all to read it. I'd suggest starting with The Birdwatcher even though it's not listed as part of the series because it's readers' first encounter with Bill South and Alexandra Cupidi. Then follow up with Salt Lane, Deadland, and Grave's End. Chances are, once you've sampled this series, you'll be just like me-- hoping that there's more to come.
Grave's End by William Shaw
ISBN: 9781529401806
Riverrun Books © 2020
Hardcover, 475 pages
Police Procedural, #3 DS Alexandra Cupidi mystery
Rating: A
Source: Purchased from Amazon UK
by Cathy at Thursday, August 13, 2020